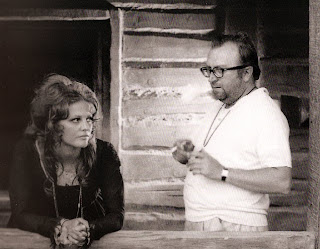 Sergio Leone: It's not that one wishes to avoid the question for diplomacy's sake, but I haven't seen many of the Westerns made by my friends, just two by Corbucci, and one by Tessari. It seems to me, though, that Tessari's western had a very sophomoric tone, it was all a joke announced and delivered in the very first frame. It seemed to me a bit indebted to Lucky Luke. On the contrary, Corbucci's film was on the heavy side, a bit over-crude. Hmm, well, it really is his kind of film that sometimes gets me a bit steamed. Sergio's sort of film has contributed to
the decline of all the commercial product out there. He may not have understood behind the illustration of violence must reside something more than shock for its own sake; some depth.
As to the Americans, sure, my films have influenced them, and how! John Milius wrote THE LIFE AND TIMES OF JUDGE ROY BEAN for me, which I turned down, and Huston made it instead. I think my films have influenced a director like the Kubrick of A CLOCKWORK ORANGE. And Peckinpah said -when there was the debate about which of us had influenced the other - that he would never have existed without me. The novelty was the realism (it may amaze some, but I believe my past work for neo-realist directors really did add up to something!)
But the violence in my films always has a fairy-tale like quality, even when the films have some political content, while Peckinpah deals with historical fact. I'm convinced Peckinpah would never have been able to do THE WILD BUNCH without me. But there are many things about Sam's films I don't like: the tortured realism, a bit delirious (I really think alcohol enters into this) and certainly I know that I'd have done THE WILD BUNCH very differently than he did.
To clarify my thinking on the subject, I must say I agree with Chaplin's proposal to present simple stories, almost fables, in order to touch on the most important social and human themes. And he did it in the guise of the little tramp, who was nothing less than the symbol of all the marginalized people in the world. Immodestly may I say that I follow his example? For me the Western is really a vehicle to smuggle in certain hobbyhorses of mine, political ones included. And Westerns have functioned well for this, because they are a wonderful medium: a genre that has always won over the public, in particular the young public who themselves don't have these vast spaces, who lack the model of the virile hero who sticks to his will to do justice till his dying breath. For sure, there's the appeal of adventure, but above all the appeal is that of life committed to justice, according to the criterion:" I'm going to get myself justice, because the sheriff -who in certain cases represents the police or other branches of the law- can't do it for me and so I'll do it myself. I go, confront the question directly, and I resolve my problem."
Posted by William Connolly at 7:24 AM