Why CUSTER OF THE WEST? 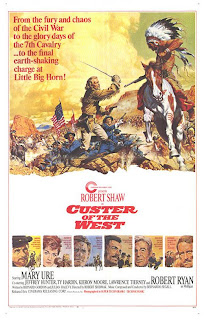 In his book HOLLYWOOD EXILE or How I Learned To Love the Black List, Bernard Gordon writes how he got involved in making movies in Spain after meeting Philip Yordan. At first Yordan was finding projects for Samuel Bronston while also making films for his own Security Pictures Inc. Gordon came aboard and got his first screen credit after being black listed with 55 DAYS IN PEKING. Later, Yordan formed a partnership with the Cinerama company. William Forman was running Cinerama and he wanted a movie about KRAKATOA. While Gordon was trying to come up with a script about an exploding volcano, Yordan informed him that Forman wanted their next movie to be about General George Armstrong Custer.
"We walked in silence as I tried to digest all this. 'Fine,' I finally countered. 'Let's do a film about Custer, a really modern film that tells the truth about him and the whole American policy at the time.'
"Yordan was annoyed. He turned on me. 'It's people like you with your antihero ideas who are ruining Hollywood! We'll just figure a way to turn Custer into a hero!'
"As far as Yordan was concerned, I still didn't get it. I still had the naive notion that I was in the business of trying to make good films. I didn't understand what Yordan understood so well - we were in the business of business, and the business of business was to make money. The first thing a businessman had to do was find the capital to stay in business. 'Good' films were films for which you could raise production money. 'Good' films were films that made money. Films that didn't make money were bad films. Despite what I had gone through, and what I'd continue to go through for quite a while, it took years for me to learn that bankers, lawyers, accountants, theater owners (meaning real estate owners), and Wall Street investors were the people who really decided what films and what kinds of films were made. Even when I finally understood this, I found it problematic that this was particularly true of Hollywood; France, Italy, England, Germany, even tiny Denmark and troubled Poland occasionally made what I considered a 'good' film. Why not Hollywood? Regardless of my thinking and feeling, I too was interested in the money aspects of all this. As much as Yordan, I wanted the money to keep rolling in. I settled down to struggle with another killer script about George Armstrong Custer."
Posted by William Connolly at 9:48 PM