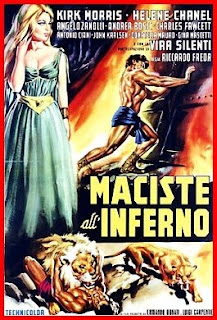 John Francis Lane: MACISTE ALL' INFERNO [aka THE WITCH'S CURSE] became one of those little films that acquire a small cult among the French critics and the very young. Really the value of [director Riccardo] Freda was that he filmed quickly. I acted for him in MACISTE ALL'INFERNO and remembered that having placed the camera in a certain position, he called: "Now scene one, then 50, then 122," always from the same position, and he shot half an hour of film in a morning!
A French critic wrote that I wanted to work with him because having worked with other great Italian directors like Fellini and Antonioni, I should now be in a film by Freda! In reality, I did it for the money - a miserly forty thousand. Freda was a real tyrant! With his dog, his women, his court. He was rather sadistic, too, with the people, with the animals that he used in the scenes. The actors, the technicians, detested it, and it was something that everybody knew about.
Posted by William Connolly at 6:36 AM