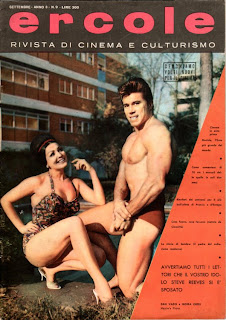 From: His Name Is Chuck 4
Interview by William Connolly and Tom Betts on April 1, 1990
Spaghetti Cinema #59, December 1994
Gordon Mitchell: Danny was probably one of the most incredible actor-athletes. He came to the Mae West Show, the last one we did in Vegas in '59. He had a couple of weeks leave from the Navy and he came to see us.
And then a couple of years later, I'm doing very well in Italy, and I asked for Sammy Burke, and then Dan came, and I got Dan in a couple films. They all lived with me; Sam Burke and Dan Vadis. And Sam Burke was a great champion himself. But Dan could jump off rails as high as seven feet, and do fight scenes with alot of jumping around. He and Brad Harris did alot of fight scenes. In THE YELLOW EYE, he jumped from the building to that tree; he could do things that were just incredible.
One day, Dan and I were walking in the Piazza di Spagna and at that time you could drive a car, and a guy in a MG; a big guy. He almost hit Dan. And Dan walked very nicely to the guy and said, "You should be more careful."
And the driver said, "Oh, you think you're a smart guy."
And, boom, Dan smacks him.
And a policeman saw it, who was a friend of mine. "Just get him out of here," he says.
That was just one of the things. I mean it was constant; and Sam Burke, too. We'd walk down the Via Veneto - these big monsters.
"What are you looking at?"
WC: It was quite a shock to find out that he had died.
GM: Yeah, but he had...
The trouble was he thought that he could do anything; control anything. And he started taking drugs and he thought he could control it. And that's why he took an overdose and the last time you saw him he had wacked himself out in a car. His sister was a very good friend of mine; Kitty. She has a store down in San Diego or Oceanside; very nice.
Dan, I saw him in '83 or '84 when Lou was over in Rome (for THE SEVEN MAGNIFICENT GLADIATORS). Of course, he was skinny then because somebody blew him out over there.
WC: Blew him out?
GM: Yeah, shot his liver out. He was skin and bones then. He was half of what he really was.
WC: I think the last time I saw him was in BRONCO BILLY.
GM: Then he was very smart with Shelley Winters (on THE SCALPHUNTERS). He wacked her out. He messed up on that, too. He knew Shelley Winters, but she had a mouth. He knocked her out. So they got him off the set.
Posted by William Connolly at 11:00 PM