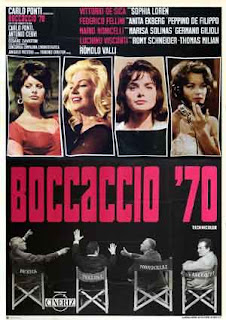 From: TAB HUNTER CONFIDENTIAL
The Making of A Movie Star
by Tab Hunter with Eddie Muller
Returning to Rome was a case of going from the ridiculous to the sublime.
"Luchino Visconti wants to meet you," Tomas told me. "He wants us to come to dinner at his villa."
Tomas had just completed a starring role for the great director in BOCCACCIO '70, an anthology of short films by some of Italy's greatest directors: Visconti, Vittorio de Sica, Federico Fellini. I was a huge Visconti fan. Roddy McDowall and I had seen ROCCO AND HIS BROTHERS at the Sutton Theater in New York when it first came out, and I'd gone back to relive it five consecutive nights, stunned every time by Alain Delon's brilliance and Annie Giradot's incredible death scene. I enjoyed ROCCO more than anything since THE BLACK SWAN, which I saw when I was eleven. I couldn't believe that the maker of this wonderful movie wanted to meet me.
Arriving at his magnificent villa on Via Salaria, we were greeted by a white-gloved manservant flanked by a pair of huge, slobbering Great Danes. The entryway featured enormous Renato Guttuso paintings, which puffed me up a little bit. On my earlier trip to Italy, I purchased a Guttuso from a dealer in Rome. I'd later learned that Guttuso and Visconti had grown up close friends. There were few people, I'd learn, that Visconti didn't know.~The man was an intriguing contradiction. Born into an affluent, artistocratic family - his full title being Count Don Luchino Visconti Di Modrone - he became a full-fledged Marxist after lending his palazzo to the Communist resistance during World War II. He survived being imprisoned by the Gestapo and went on to create neorealist films that attacked Fascism and championed the working poor. Yet he lived like royalty.
We were ushered into a fabulous living room filled with art, antiques, and piped-in classical music. Visconti was holding court. Annie Giradot and Renato Salvatori, the costar who killed her in ROCCO, were sunk into an enormous sofa, engulfed in down pillows. Marina Cicogna, who was either a marchesa or a contessa, sipped champagne with her companion, who was definitely an investment banker. The conversation flowed from French to Italian to German. Three young butlers in immaculate white uniforms attended to the guests.
"I didn't know Communists could live like this," I quietly cracked to Tomas.
Visconti welcomed Tomas with a big hug. He was like an elegant panther, supremely relaxed in his own skin, a commanding presence with a rich, mellow voice. Looking at me he said, "So, finally we meet...Welcome." I wasn't sure what that "finally" was about.
We dined at a great table set with pounds of silver and gigantic candelabras dripping wax over everything. Butlers hovered discreetly. I'd never seen anything so decadent - and I loved every minute of it.
Visconti's gatherings were legendary for the eclectic mix of guests. Not only movie players, but people from the stage, opera, politics, fashion - the man's interestes and passions were boundless.
One of those passions was horses. Even as he cultivated youthful interests in music and theater - he was friends with both Puccini and Toscanini - Visconti's real job was breeding racehorses. It seemed to be his calling until he moved to Paris and became friends with Coco Chanel, who introduced him to director Jean Renoir. That's when cinema became Visconti's ossessione. After the war, he smoothly alternated between directing films, theater, and opera, becoming accomplished, and established, at each. Maria Callas credited him with teaching her how to act.
He also earned a reputation for favoring "beautiful" leading men. I couldn't help wondering if this was why the Sigh Guy rated an invitation to the villa. Luchino's preferences were well known but never discussed. To be flagrant was to be gauche, something no elegant nobleman could abide. The Italian press, unlike its American kin, paid little attention to Visconti's sexual orientation. His public politics earned the ink, not his private affairs.
Whatever his motives for wanting to meet me, I was surprised, and delighted, when during dinner Luchino revealed that he'd tried to contact me years earlier, through Famous Artists Agency. He was looking for a fresh young Hollywood actor for his lush 1954 costume melodrama, SENSO, and thought I might have been right for the callow Austrian officer with whom Alida Valli falls in love. But when Henry Willson didn't respond, Farley Granger - a much more experienced actor - got the part.
I'd heard lines like this before, but Luchino was serious.
"We are going to make a film together - soon," he told me. It was like getting a benediction from the pope. In Hollywood, I'd have passed it off as predictable show-business party patter. Luchino wasn't like that. You felt you were in the presence of a man who made a difference, and you took everything he said as gospel truth.
My next picture, regrettably, was a far cry from Visconti's realm. While he prepared a masterpiece, THE LEOPARD, I signed on for OPERATION BIKINI.
Posted by William Connolly at 6:19 AM