Corbucci on the difficulties of making Epic Films. 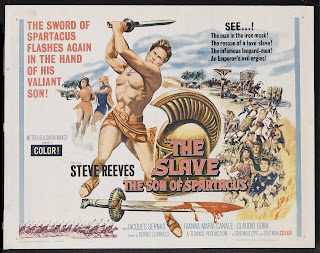 Sergio Corbucci: The first difficulty in directing films like IL FIGLIO DI SPARTACO (aka SON OF SPARTACUS, aka THE SLAVE) was that of your voice being heard, because - despite the megaphones - the open air dispersed the sound, and there was, for instance, two hundred horses to tell "Action!" So making yourself heard was a little bit difficult. Another was that of costuming the people; the hundreds of extras that arrived three or four hours before shooting that needed dressing as ancient Romans and had to be checked out so that they didn't leave on anything that contrasted with these costumes. The things that made me most perplexed before the beginning of the film were the battles. Many times I wondered, "How do I do it? How will I resolve it?" Then there were the things that had to be decided on location at the last moment, things that couldn't be decided on the drawing board.
Once, during work on IL FIGLIO DI SPARTACO, there was a curious episode. The scene was planned for Steve Reeves and Jacques Sernas to arrive by horse from a distant dune and do and say certain things. And from the position far away where we placed the camera, I then had to give "Action!" to the actors by radio telephone. So from the established position, the two riders came up at a gallop and arrived at the agreed point in front of us. But arriving in front of the camera were not Reeves and Sernas, but rather Rory Calhoun and another actor, also dressed as Ancient Romans, but with costumes different to those in my film.
I thought I was seeing things. And I thought it was strange when they started performing an action infront of the camera that was totally different to what I had planned. The explanation came an instant afterwards when we discovered that there was another crew a kilometer away on the other slope of the dune that was filming IL COLOSSO DI RODI, and the actors had taken the wrong direction.
Above all I was a fan of the Western and therefore my Ancient Romans were a little bit derived from the Pioneers, the Sheriffs. The sword to the side was like a gun. Indeed, it was in this way my films of the genre differentiated from those of Francisci and of Cottafavi. But then it really seemed quite proper that the Western was solely an American prerogative, and impossible to make by us.
Posted by William Connolly at 11:48 PM