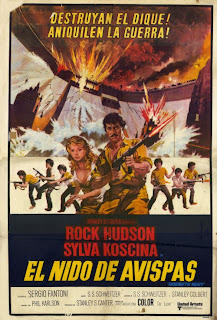 From: Rodd Dana
The Actor with the 3-D Name
Interview by Michael Barnum
VideoWatcHDog No. 143 Sep 2008
How did you become involved in the film HORNETS NEST?
Perhaps somebody called my agent for somebody who looked and sounded very American.
Did you have an opportunity to get to know Rock Hudson during the filming? Any recollections or stories about him?
As near as I recall, he was not very friendly and stayed pretty much surrounded by his "entourage".
How about Sylva Koscina and Giacomo Rossi Stuart?
Only saw La Koscina once and never spoke with her. I had known Giacomo from Rome; we played cards a couple of times. I was only on the set one day, then back to Rome.
Was this an American production?
Near as I recall, it was a co-production.
Posted by William Connolly at 9:08 AM