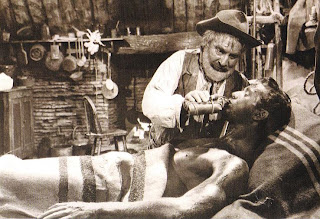 [photo from KILL OR BE KILLED]

From: Rodd Dana
The Actor with the 3-D Name
Interview by Michael Barnum
VideoWatcHDog No. 143 Sep 2008
Why the name change to Robert Mark?
That is an amusing story. When I did OPERATION WHITE SHARK under the name Rodd Dana, the film was a cult hit with the Italians. When the producer and director of SICARIO 77, VIVO O MORTO saw it, they decided they wanted me for their flick. But when I went in for a chat, they asked me if I would be willing to change my name. They said that Rodd Dana not only sounded like an Italian name, but the local gentry pronounced it "Rodanna", which had the ring of a woman's name. I said, "Look, you guys..." - in my best Italian, of course - "for what you're paying me, you can call me Chuck Wagon for all I care!" So, after going over name possibilities for a couple of days, we finally settled on Robert Mark. They were delighted. They now had a name that sounded "reeully Amurikan" and a whole lot more "Westurne" than "Rodanna". So everybody was happy; they got their way and I got rich. I used that name until I left the cinema behind in Rome in the early Seventies.
Posted by William Connolly at 8:35 AM