Yul's son doesn't even name ADIOS SABATA in his book. 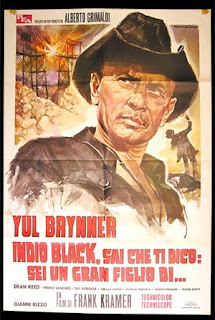 From: YUL
The Man Who Would Be King
A Memoir of Father and Son
by Rock Brynner
By now, he told me firmly, he regarded himself as a character actor, as if this were a rite of passage that the family ought to note. He was quite realistic about aging, and recognized that he had passed the point where he could play romantic leading men on the screen - such scripts just weren't proposed to him anymore. Instead, he was being offered roles as villains that, more and more often, were extremely violent. But by this time, for a variety of economic reasons, the film business was in such dire straits that even Henry Fonda was making spaghetti Westerns - and so was Yul. These were Westerns, shot in Italy and Spain, in which only the famous star spoke English; all the other characters were played by gnarly-looking Italians who merely mouthed the English dialogue, which was later dubbed. This was not the goal Yul had had in mind when he had studied with Michael Chekhov, but he regarded it as a personal insult when I pointed that out, as he noted that I myself was being supported by these awful movies.
Posted by William Connolly at 10:28 PM