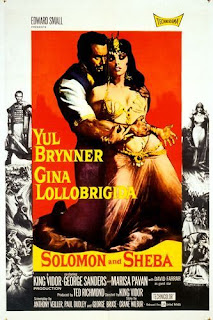 From: YUL
The Man Who Would Be King
A Memoir of Father and Son
by Rock Brynner
[After a career as one of the earliest directors at CBS-TV, Yul Brynner became a star on Broadway in THE KING AND I. This led to movie roles in THE TEN COMMANDEMENTS, THE KING AND I, ANASTASIA, THE BROTHERS KARAMAZOV, THE BUCCANEER, THE JOURNEY and THE SOUND AND THE FURY. However, he found, that no matter how much money he made, he spent it and now he owed the IRS.]
In the fall [of 1958], I went back to boarding school and Mom went back to heavy drinking, and life continued smoothly until Tyrone Power died in the autumn. He had been in the middle of shooting a biblical epic in Spain, SOLOMON AND SHEBA, with Gina Lollobrigida, and now the insurance company was obliged to offer a huge salary to any actor who would replace him in a role that Yul, among others, had long since turned down. The difference was that now they were ready to pay him one million dollars. The way personal income tax was structured in the 1950s, his tax bill on that million would be nine hundred thousand dollars. But there was a solution. The government allowed a total exemption to citizens who resided abroad for a minimum of five years. Yul saw this as his chance to pay his debts: one million dollars tax free was all the money he'd ever need, then he would be free to give up stardom and return to directing at last.
Virginia [Gilmore, his wife and Rock's mother] would not hear of it. It was unpatriotic, or worse. It was dishonest and immoral and unredeemable. "All you want it to be a gypsy millionaire," she screamed, since the kid was away at school, "without a care or responsiblity in the world. Well, I'm sorry, Mr. B., but you have responsibilites, whether or not you care to notice. And if you can earn money ten times faster, you better believe me, I can spend it faster still!" Or words to that effect...
Before settling down as a millionaire, Yul first had to make SOLOMON AND SHEBA. Here, for the first time since the beginning of his stardom, was a piece of unmistakable crap, on an aesthetic par with Steve Reeves as Hercules. Just two years after THE TEN COMMANDMENTS, the zenith of the genre, came this nadir. Gina Lollobrigida, with a ruby in her navel, had all the sex appeal of a fist. George Sanders, in his fifties, appeared so feeble in battle that he turned to the camera as if soliciting comfort from the audience. And Yul, as the young Solomon with Tyrone Power's hairstyle (to match previously filmed sequences), spent most of his screen time trying to keep a straight face. Both Michael Chekhov [Yul's acting mentor] and Cecil B. DeMille had died, mercifully, before SOLOMON AND SHEBA was released.
The experience of renouncing the values and loyalties that had guided him for decades was not an easy one. But at least he was out of debt at last, and putting aside a nest egg that would allow him to become the director he always wanted to be, while feeling secure that he could guarantee his son, and even his grandchildren, a college education. But the extravagance of his daily life grew as fast as his earnings: whenever he had the wherewithal, Yul Brynner was one of the all-time great spenders. "I have no respect for money, Rock, " he always reminded me. "I piss on the stuff." I took careful note of this, as part of my moral education.
Posted by William Connolly at 9:01 PM