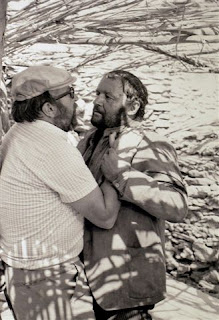 Sergio Leone: Steiger is a child without any personality of his own, who assumes a different character in every film, and even takes it home with him. Three months before the start of DUCK YOU SUCKER, he began taking lessons from a Mexican woman to learn the cadence and accent of one for whom Spanish is one's mother tongue, and how he'd express himself in another language (i.e. English). That's the sort of character he was going to play in the film. Well, for the three months preceding the first fall of the clapper, then throughout the shooting, and after till the end of dubbing, Steiger always spoke that way, on the set and in private. To the point that some girls who looked him up in New York for the weekend (he was divorced at the time) asked me: "What's happened to Rod? He speaks in such a way that, even in intimate situations, you can't understand a word he's saying."
For DUCK YOU SUCKER, the choice of Steiger and Coburn was somewhat imposed by the Americans. So, obviously, in order to adapt a movie that was already costing a lot to my criteria, I was forced to rewrite the screenplay day by day as we shot, and to tell the actors not to ask me today what we'd be filming tomorrow. From the start, Steiger complained a lot, even saying to me: "You belong to the type of presumptuous director, like Fellini and Rosi. I've worked with you, and I know that you detest actors, but I must make you aware that there are only six true actors in the world, every continent has one and you'd better learn to live with that."
I said, "Since it seems that I've hired one of those six, would you please do me the courtesy of telling me who the other five are, so I can remember in the future not to hire them."
Whereupon, we began to see eye to eye, also because, upon his nth outburst, I made such a scene a kilometer away. Whatever the reason, he became very docile, he didn't even protest doing the same scene over thirty times as happened for certain takes. I came to realize that on the first take, he'd chew the scenery, and the best method to obtain what I wanted was to tire him out.
Posted by William Connolly at 10:03 AM