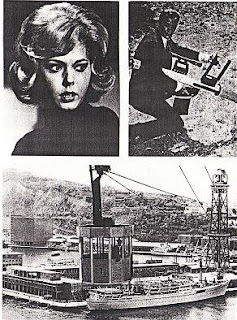 From: Rodd Dana
The Actor with the 3-D Name
Interview by Michael Barnum
VideoWatcHDog No. 143 Sep 2080
The only other story I can think of concerns the day we filmed a sequence with a motorcycle. I was supposed to crash it through a barricade at 60 miles per hour, so, on the day of shooting, we wanted to rehearse the shot. I was supposed to ride up to the barricade and stop just short of ramming it, so as to give the camera people a good line-up. As I approached, the throttle jammed, accelerating the Spanish vrsion of a BMW to about 70. I couldn't stop. I destroyed the barricade, which was the only one they had, and had to dump the bike 50 yards across the golf green to save my own life. The poor director nearly had that same coronary all over again, and we had to wait all afternoon while they had a brand new wooden barricade made to order. The Spanish stunt director trashed the guy who had rented the bike and had his own Norton brought to the sight. I was delighted as I had a Norton back in Rome. The BMW was a piece of junk, and I wasn't very comfortable with it. I had raced bikes for Duccati for six years and could handle anything, but I knew that first machine was a potential death trap the minute I got on it.
When and if you see the film, you will chuckle at the Italian version of the killer bazooka that my character carries in a golf bag as he rides off astraddle his trusty cycle to get the bad guys. They never could get the thing to work. Well, I think it did work once, and seems to me it nearly burned down a set on the golf course where we were shooting. Nothing the Italians ever made in those days seemed to work the first time... or the 2nd... 3rd... 4th... The machine guns always jammed, and the handguns were always going off when you least expected them to. Everything was a hand-me-down from films of the '30s and '40s. We always felt lucky to have gotten out alive after using much of the equipment.
Any stories or recollections about director Mino Guerrini?
Good director; a bit strange, very moody, did a lot of good cinema before he died quite young.
Posted by William Connolly at 8:00 AM