Rodd on the cast of KILL THE WICKED! 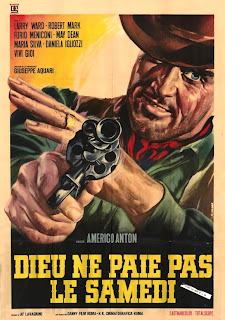 From: Rodd Dana
The Actor with the 3-D Name
Interview by Michael Barnum
Video WatcHDog No.143 Sep 2008
Prior to your involvement in these two films, were you aware of this new Italian breed of Western?
Burt Reynolds was a friend and when he came over to Italy to do a Western for Sergio Corbucci, I hung out on the set a few times. Burt thought Italians were a bit nuts, as did we all, but then along came Sergio Leone and Clint Eastwood, and - "Bingo!" - the Spaghetti Western was a hit. Tony Russel turned down the role in A FISTFUL OF DOLLARS. I doubt he's ever stopped kicking himself. I don't think any of us had any faith that these people, who were great at making Latin-lover melodramas and great comedies, could ever make successful Westerns. Oh, well. Had I not fallen off that horse in Spain, I probably would have gone on to make more of them.
GOD DOES NOT PAY ON SATURDAY has quite a cast.
Larry Ward was a good friend; I last saw him a couple of months before he died - in L.A. sometime in the '80s, I think. I'm still in touch with his wife, Roberta Haynes. Furio Meniconi was one of the gentle giants. He always reminded me a bit of the Duke: very kind man, good actor, lots of fun. Maria Silva was good to work with, don't know what ever became of her. I think that, in the Madrid cinema scene, she was fairly famous at the time.
Posted by William Connolly at 8:14 AM