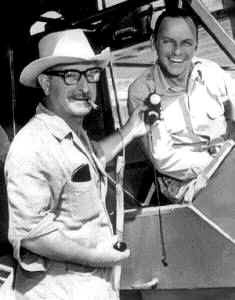 From: HOW TO MAKE A JEWISH MOVIE
by Melville Shavelson
About those thiry houses: by the time the Mirisches were certain the picture would be made, all the available housing in Israel was gone for the tourist season. Only at the insistence of the government were we enabled to take over three floors of the Avia Hotel, near the airport, and buy thirty cottages the hotel had just completed on the hotel grounds, with the understanding that we would sell them back when we left.
Thus was born Little Italy of Tel Aviv. The Cesar, nay, the Nero, of this colony was the most talented, inch-for-inch, cameraman in the world. His name is Aldo Tonti and he is five feet tall when measured to the tip of his uptilted cigar. Aldo has photographed so many motion pictures in Italy and around the world for so many years, no one knows his true age.
For a while, Aldo was Mussolini's official photographer, but he quit, it is rumored, because Mussolini was too much of a liberal for him. Aldo rules his camera crew - made up almost exclusively for his sons - with an iron hand and a walking stick carved out of the bones of his last director. He shouts at them, punches at them, insults them, curses them, and promises to fire them as soon as he catches his breath. No one minds, because Aldo is a pussycat and they don't want him to realize he's been found out. His crew loves and protects him with a fierce loyalty their wives will never know.
Posted by William Connolly at 11:11 PM