Italian eating on location in Israel. 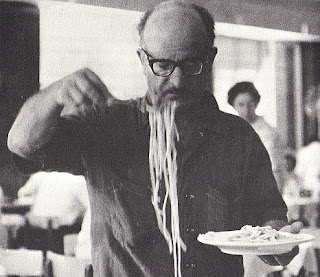 Aldo Tonti dishing up a plate.

From: HOW TO MAKE A JEWISH MOVIE
by Melville Shavelson
[Writer/director Melville Shavelson brought director of photography Aldo Tonti and other Italians to Israel to make CAST A GIANT SHADOW.]
When the uprooted Italians of the camera and carpentry crews were placed in their spare little bungalows, they immediately went out and bought all the spaghetti in Tel Aviv, which took about five minutes.
The chambermaids at the Avia Hotel, who took care of the houses, complained there was something mysterious going on. Every day they had to clean spaghetti off the ceilings. They couldn't figure out why. One day I was invited to have lunch with the crew, and the mystery was solved. I was ushered into a little house that had no furniture in it but a huge dining room table and chairs. Since, to an Italian, the stomach is the second noblest part of a man's anatomy, they had wisely enshrined it by doubling up on their sleeping quarters and devoting one of the houses exclusively to eating. All the chores were rotated, with everyone serving as cook or waiter or dishwasher on a regular schedule.
Except Aldo. He was enthroned regally at the head of the table like a Queen Bee ruling over a hive of tomato sauce. On a gesture from Aldo, I was presented with an array of antipasta that would have done honor to Alfredo Alla Scroffa in Rome, followed by insalata, scallopini parmigiana, and a delicate pasta cooked al dente.
The cook apologized that the pasta was not quite perfect. The cottages had no stoves, so they were cooking on tiny hot plates, and the only way to be certain the spaghetti was the correct consistency was to throw it against something. If it stuck, it was al dente.
Posted by William Connolly at 10:25 AM