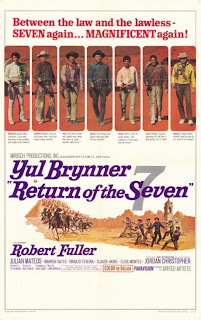 From: YUL
The Man Who Would Be King
A Memoir of Father and Son
by Rock Brynner
"Dad, who's going to play the other cowboys in MAG SEVEN?"
"Why do you ask?"
"Well, I heard you say you were still looking, and there's this guy on TV who's really cool. He carries a sawed-off shotgun, and - I don't know, he's kind of like a teenager. His name is Steve McQueen. He'd be really good. He's already starred in one movie: THE BLOB...
"Your father's got exactly the right idea, Rock," McQueen said to me one afternoon on location outside Cuernavaca. Then he paused. "Perfectionism... you dad's perfectionism is legendary. Just learn to do one thing better than anyone else, doesn't matter if it's Ping-Pong or drawing a six-shooter real fast. Work to be best. Oh, you'll lose plenty of friends that way. Like Yul says, 'So, I won't win the Nice Guy of the Year award.' Anyway, I heard you'd seen me on TV, and put in a plug with your dad. I just wanted to thank you. You've got quite some father, Rock." And he paused again it occurred to me that my dad was a hero to my own cowboy hero. "He's gonna be a tough ol' man for you to live up to, all right." I didn't need Steve McQueen to tell me that. " 'Specially if he ever gets mean to you. He's real competitive."...
Preparations continued for a sequel to THE MAGNIFICENT SEVEN called RETURN OF THE SEVEN. When Yul had first hired Steve McQueen for the original film, McQueen had promised, informally, to appear in any sequel. But when Yul sent him the script to RETURN, McQueen's agent went back on Steve's word on his behalf. My cowboy hero had backed out on his word, and the little faith I had left in heroes was shatttered. Yul had half expected him to fink out, and went about finding a whole new cast for the sequel...
In the spring of 1966, Yul went to Alicante, Spain, to shoot RETURN OF THE SEVEN. The cast was a bunch of young, interesting men, who, everyone assumed, would soon be as famous as Steve McQueen, Charles Bronson, and James Coburn ever were - they were Bob Fuller, Claude Akins, and Warren Oates. There was no obvious reason why this could not be as good a film as the original - indeed, so much had been learned on the first film that the second should have surpassed it. The fact that it was shot in Spain instead of Mexico need not have made much difference. There was the great Emilio Fernandez as the bandido this time. The director, Burt Kennedy, was no slouch. Why then did it have a cut-rate feel about it? It was as if an idea that had proven itself was now exploiting itself...
One day a plump, beared customer in dirty jeans and dark shades came up to me in the sushi bar. He looked like a low-rent biker. "Are you Rocky, Yul Brynner's kid?" he asked, and when I nodded cautiously, he removed his shades. It was Steve McQueen.
In words that I can barely remember, he said he's always meant to stop by this roadside shack. Recently THE MAGNIFICENT SEVEN had been shown on television, and a carpenter working on his house mentioned to him that I worked at this sushi bar - that was why he was stopping by. Trying my best to ignore his appearance, I sat down with him at a table. He explained that by disguising himself as an ugly biker type he was free to move about publicly, the way ordinary folk do. I tried to picture Yul doing that. Then McQueen told me he'd been reviewing his life carefully for some months. "Yul and I fell out over some stupid thing, a couple of years after we made that movie." He paused. "I don't remember. Maybe it was something in the press. Or the plans to make a sequel. We had an argument about The Deal. I'm sure he doesn't remember exactly either, it was such a trivial thing." McQueen was wrong; Yul remembered perfectly.
"Anyway, I stopped by so's to ask you to give him a message, next time you speak to him." He paused, but this was a different kind of pause. It was difficult for him to say what he had to say. And yet during the several seconds that he paused, it was obvious that something had happened, something had changed inside his soul.
"Ask Yul to forgive me. I was always very grateful for what he did. He transformed my career and, with it, my life. Then we had some stupid argument because I wouldn't appear in RETURN OF THE SEVEN, and I never saw him again. Well, I came here today to ask you to give Yul a message. Tell him I did wrong, and I'm sorry for it. I never stopped feeling bad about it, because there's no doubt, THE MAGNIFICENT SEVEN was the film that made me a star. And I never did forget that, or forget him."
I promised to give Yul the message, mentioning that Dad and I didn't talk much. I was going to say something about how unwell he looked, but then he might reasonably have asked what the hell I was doing working as a short-order cook. So I just told him that he'd been a real hero to me.
"I remember, Rock. You first suggested me to your father, because you were a fan of my TV show. I never forgot you either, all the time I was a star."
"But you're still a star," I objected. Steve McQueen didn't need me to tell him that. Then I was called back in to the office to finish the accounts, and we said good-bye. A few months later, Steve McQueen was dead.
Posted by William Connolly at 9:33 AM