Italian carpenters in Israel for CAST A GIANT SHADOW 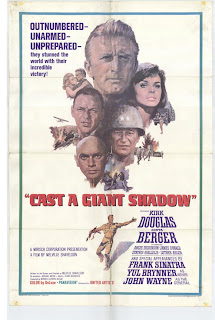 From: HOW TO MAKE A JEWISH MOVIE
by Melville Shavelson
[Thanks to John Wayne liking the idea of doing a movie about the American Colonel David "Mickey" Marcus, who helped Israel win its first war after being declared a nation, writer/director Shavelson was able to get the Mirisch brothers to mount the production in Israel.]
On March 14, 1965, the first wave of American, British, and Italian technicians for CAST A GIANT SHADOW arrived in Tel Aviv and demanded their expense checks. I arrived with them, script in one hand, pencil and eraser in the other, and holed up at the Dan Hotel until a house could be secured for my wife and family to join me.
Why we were bringing so many of our crew with us requires a bit of explaining. In America, every Jewish mother wants her son to be a doctor or a lawyer. In Israel, there are so many doctors and lawyers that if the lawyers didn't get sick and the doctors didn't get in trouble, they would both starve.
Consequently, in Israel every Jewish mother wants her son to grow up to be a carpenter. In a country that was building housing, at that time, for close to a hundred thousand refugees a year, a carpenter was assured of year-round employment at a salary no doctor could approach. No self-respecting carpenter wanted to give up that kind of security to work on a motion picture that was going to tear down everything after they built it.
When the Histadrut, the national labor union, heard we were hiring Italian carpenters, they immediately protested. We offered to hire any Israeli carpenter who was willing to work for us. No such person ever showed up. So we hired our Italian carpenters, flew them from Rome, bought thirty houses for them to live in, and paid their living expenses. And it cost less than if they had been natives of Tel Aviv.
Sometimes it hardly pays to be Jewish.
Posted by William Connolly at 10:22 PM