Rodd back in secret agent mode. 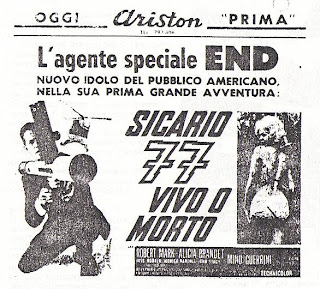 From: Rodd Dana
The Actor with the 3-D Name
Interview by Michael Barnum
Video WatcHDog No. 143 Sep. 2008
SICARIO 77, VIVO O MORTO was another spy film? What can you tell us about that one?
That was over 40 years ago, but there is one day's activity from that frantic period I'll never forget. We had contracted for a couple of hours to shoot a fight scene in an aerial-tram three hundred feet in the air over the Barcelona harbor between the docks and Tibidabo Amusement Park. We finished filming the sequence and the director, Mino Guerrini, radioed the Tibidabo command center to bring us back over. No response. An hour later, he finally got through to them and was told that the operador had misunderstood, thinking we had the tram for three hours, and had gone for lunch. They said they would bring us right in. The tram moved fifty feet and abruptly stopped, swinging precariously above a large Turkish tanker far below. We immediately called and were told there had been a power failure but that it shouldn't be long. Well, that was early afternoon and it wasn't until after 7:00 that evening that we were at last brought to the Tibidabo side - hot (it had been over 100 degrees all day in the Spanish August sun), tired, hungry, dehydrated and, needless to say, very pissed-off. It seemed that nobody had reported seeing an occasional person taking a wizz from the gondola, yet we each took our turns. It was lucky in a way that we had nothing to drink up there. The manager of the amusement park was very apologetic and issued each of us lifetime passes to the park! I have never been back... don't know about the others. The director was so mad, I thought he might have a coronary, which he did have a few years later.
Posted by William Connolly at 9:02 AM