Sergio Leone on DUCK YOU SUCKER 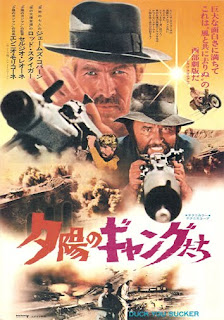 Sergio Leone: I was only going to produce GIU LA TESTA (aka DUCK YOU SUCKER, aka A FISTFUL OF DYNAMITE), and I proposed Peter Bogdanovich as director to the Americans. He had done revisionist takes on some old genres successfully (i.e. PAPER MOON and WHAT'S UP DOC?). But he wanted to "revisit" the Western along very conventional and stale lines, and, in any case, he understood he wouldn't be able to get away with that - not with me around, and not with that budget! - and he turned it down. I thought about Peckinpah, who'd have worked, or of my assistant director Carlos Santi - with me supervising, but the actors rebelled at this proposal. "Euro" was anticipating lots of cash returns, and we were ten days away from starting, and so I ended up directing it myself, and - slowly, slowly - I became enthusiastic about it, even though, at the beginning, I was feeling frustrated. I was already aching to do ONCE UPON A TIME IN AMERICA. There had been problems with the actors, because I wanted Jason Robards and Malcolm McDowell - two seperate generations - but Steiger and Coburn worked out just fine: the intellectual in counterpoint to the naif set down into world war, which also represents the world of today with all its horrors and looming problems. It's necessary to take as the subject the smallest characters taking on the biggest situation. In the end, it's the small character that explains to the intellectual - the slightly presumptuous intellectual who wants to serve the naif.
A Pygmalion in reverse in short.
And in the end, the intellectual throws away his books.
A character in the film says at some point: "He who talks revolution, talks confusion", and this was another theme at the heart of the film; a film in which the historical framework simply supplied a pretext to speak of much more general things.
Posted by William Connolly at 8:18 PM