Shavelson and Gable making IT STARTED IN NAPLES. 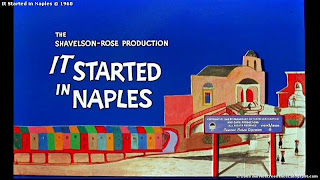 From: HOW TO MAKE A JEWISH MOVIE
by Melville Shavelson
One final trauma to complete this Italian opera. I have mentioned the late Clark Gable without thinking it necessary to repeat what everyone who ever worked with him knows; that he was one of the finest and most considerate of men at all times, not only to the little people, which gets you publicity, but also to the director, which sometimes gets you nothing but contempt from your brother actors. However, he did have in his contract a clause which declared his working day finished at 5:00 P.M., whether we were out of film or not.
I had been shooting a courtroom sequence with Gable, Sophia Loren, De Sica, and four actors playing the judges - an Italian court has four judges and no jury, a kind of spread-the-work-among-us-lawyers idea. On the second day of shooting, an assistant director informed me that the chief judge hadn't shown up. When I inquired why, he told me, quite simply, that the actor had found a better job.
Five minutes later, when they pulled me down from the catwalk where I had gone for a short stroll, the assistant tried to calm me by explaining that there was no reason to get upset, since the actor had sent his brother to take his place.
It was then that Bob Surtees, the Academy Award-winning cameraman - but not for our picture, I must sadly add - endeared himself to all of us for all time.
"I wonder," he mused softly, "if Gable has a brother who'll work after 5?"
Posted by William Connolly at 7:46 AM