Rodd on working with Gordon Mitchell 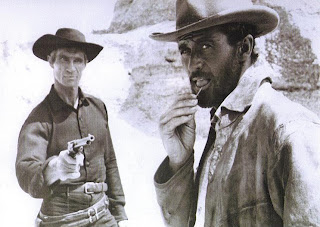 From: Rodd Dana
The Actor with the 3D Name
Interview by Michael Barnum
VideoWatcHDog No. 143 Sep 2008
You have a impressive, well-choreographed fight scene with Gordon Mitchell in KILL OR BE KILLED. It is a wonder you both weren't injured. Was it difficult to rehearse and film such a scene?
As a matter of fact, Gordo and I put that scene together in one morning. He arrived in Manziana, where we filmed the bit on a ranch at 7:00 that morning. We choreographed it in less than an hour, began filming at 9:00 and were finished before lunch. Gordo was a dream to work with, a real first-class pro. We were both athletes and had both been boxers, so this fight scene was really a fun walk in the park. He was not only a pro, but also a gentleman. Everyone who knew and worked with Gordon Mitchell loved and respected him. I'll bet you didn't know that he had been a biology professor in California before he got into acting!
Posted by William Connolly at 9:18 PM