Sergio Corbucci on his last Western. 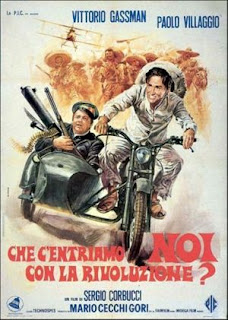 Sergio Corbucci: For CHE C'ENTRIAMO NOI CON LA RIVOLUZIONE? (aka WHAT AM I DOING IN THE MIDDLE OF THE REVOLUTION?), I returned somewhat to the theme of a film I'd done with Tota and DeSica, I DUE MARESCIALLE; the story of a rascal who is forced to impersonate an heroic man and becomes a hero in spite of himself. It was a very funny film. Gassman was in it, much like his character in LA GRANDE GUERRA, and there was Paolo Villagio, this new comic just getting started. With CHE C'ENTRIAMO NOI CON LA RIVOLUZIONE?, which would almost have been title CHE C'ENTRIAMO NOI col Western (or WHAT AM I DOING IN A WESTERN?) - I said farewell to the genre, which had been a magnificent adventure that had spanned almost a decade, with some rare returns to other sorts of films.
Pity that this adventure was a bit spoiled by Enzo Barboni, the only unworthy son of our enterprise, who with LO CHIAMAVANO TRINITA (aka THEY CALL ME TRINITY) dealt a death blow to the Italian Western, in the sense that he - my collaborator on twenty films and on almost all my Westerns - finding himself able to graduate to directing a little Western exploited everything we'd done together, even the films done with Toto - with the result of turning it all into a mocking comedy. He took Terence Hill, who was then developing as an imitation Franco Nero because of his resemblence to him, and paired him with that big lug Bud Spencer, turning them into a sort of Laurel & Hardy - a little strange, a bit rascally - and it had a big success. But he killed off the Western because after it had been made so ridiculous, no one could even again take a gunfighter blazing away seriously.
Posted by William Connolly at 11:20 PM