The Associate Producer of THE CASTILIAN 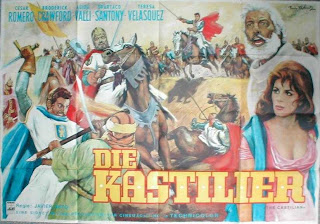 From: SO YOU WANT TO MAKE MOVIES
My Life As An Independent Film Producer
by Sidney Pink
I was having money problems of my own. I had contemplated investing my profits from the sale of JOURNEY TO THE SEVENTH PLANET, but with the size of the production shaping up, that amount was inadequate to cover our share of the cost. In Palma, I made the acquaintance of a retired American businessman, Joe Leonard. He was one of the most pompous men I have ever known. I don't know whether Joe realized he gave that impression, but he never did anything to change it. We played bridge with him and his alcoholic wife, Lillian, twice a week. Everything that I was able to glean about Joe's past indicated he had made a small fortune in what I believe was the insurance business. He had retired to Sarasota, Florida, from Skokie, Illinois. I never did get the full story of what had caused his departure from that quiet city; I only knew he and Lillian pulled up stakes, sold their home, and came to Palma to finish out their days. I believe Joe was in his well-preserved seventies and Lillian was not far behind. Despite an apparently open facade, Joe and Lil never discussed their past except in very general terms.~Joe and I talked at great lengths about my legal problems with AIP, and he hinted he might be willing to invest in one of my projects. After my distasteful experience with ANGRY RED PLANET, I resolved I would never again involve any of my friends in my business. I had no connections with a bank, and my credit rating was nonexistent in Spain. Rationalization is one of the most useful capabilities of the human mind. My wife easily convinced me to change my mind with the remark, "Joe Leonard is no friend - what problem could he present? You don't even like him!" When it was put that way I had to agree. I proceeded to speak to Joe, who was most eager to join in what he perceived to be a golden opportunity to become a film producer and have his name on a film for posterity. Not that he wasn't interested in the possible fringe benefit of making money. Despite his assurances that he realized what a speculative venture it was, I knew he would be most unhappy if he didn't get his money back plus a tidy profit.
Joe invested $75,000 plus a loan of $25,000, in return for five percent of my share and a note for the $75,000 that had to be repaid before distribution of profits. He received a four percent interest in a $1.6 million picture for an investment of $75,000, which was totally secured by a first claim on the receipts it generated. He drove a hard bargain but I didn't care, for the harder he bargain the more my rationalizations salved my conscience. Joe also insisted upon associate producer credit. I now had enough money to take care of my contracted share of the budget. We were ready to begin production.
Posted by William Connolly at 6:17 AM