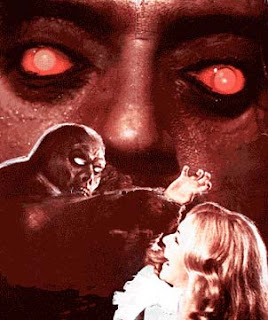 From: HOLLYWOOD EXILE Or How I Learned To Love the Blacklist
by Bernard Gordon
Miller quotes reviews of HORROR EXPRESS from the British press in his book on Christopher Lee and Peter Cushing. In the Evening Standard review, Alexander Walker noted, "It was made in Spain, had far more style and much, much more speed than the home-grown horrors but catches the national characteristics nicely." In the Evening News, Felix Barker proclaimed, "It is a rather splendid compound of old-fashioned melodrama." Reviewing the film for the Monthly Film Bulletin, Tim Milne praised the script: "[It] unwinds itself with sufficient cunning to keep interest alive, always one step ahead of the audience with a new revelation to come..."~Joe Dante, the esteemed American filmmaker and a director of excellent horror films, called HORROR EXPRESS one of his five all-time favorite horror films: "Cossacks, countesses, and mad monks abound, the plotting achieves astonishing complexity for a film of this type, and the level of humor is surprisingly sophisticated. Cushing and Lee are especially amusing... In short, it is a real treat."
Years later, in California, I was dragged out to speak about my science-fiction films and found myself next to Joe Dante on the platform. He turned to me and said how pleased he was to meet the producer of HORROR EXPRESS.
Posted by William Connolly at 8:52 AM