Starting FINGER ON THE TRIGGER without a star 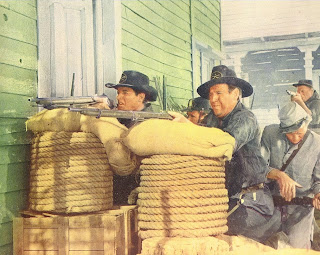 From: SO YOU WANT TO MAKE MOVIES
My Life As An Independent Film Producer
by Sidney Pink
Spain was becoming a mecca for almost every unemployed American actor in Europe, and we were able to recruit a cast of all English-speaking professionals. James Philbrook, one of the stars of the TV series Wild West, made his home in Madrid, and while his name value was not too important, Jim was a fine actor and played in almost every film I made for five years. He was a good-looking, rugged, typically American six-footer, and he saved my neck on many occasions. We also sent some of our better Spanish actors to an English clinic we ran for those who wanted to learn to read their lines in English. The signing of Victor Mature gave us a badly needed shot in the arm, but unfortunately, it was only temporary.
We deposited the money with Tony Recoder and we received our first demand from Mature. He would not get within ten feet of a horse and he demanded to be allowed to bring his own stand-in stunt man, paid for by us. Tony learned Victor Mature had a mortal fear of horses and had never ridden in his entire movie career. I found this hard to believe, but all his riding and chase sequences were shot on a dummy horse or with his stand-in, who bore an amazing likeness to him from a distance. We had no choice but to agree.
Victor's next demand was for two first-class cabins aboard the Queen Mary since he refused to fly. Besides his fear of horses, he was also afraid to flying. The cost of these cabins was triple the two first-class airfares promised in his contract. Then he demanded five nights lodging at the Savoy Hotel in London for his recuperation from the long ocean voyage. He demanded the royal suite and his daily expense allotment to begin as of his departure date from Los Angeles, and for his stay in London, the allotment would be doubled. He also insisted on a royal compartment on the train from London to Madrid.
We complied with all of Mature's demands. Our starting date was set for two weeks after he left Los Angeles for New York and embarked on the Queen Mary. We prepared everything around that date, and expected him to arrive in Madrid two days prior to our start.
When we heard nothing from either Mature of his stunt man by Sunday, I called Tony to check on his whereabouts. We had scheduled an easy first day, but we did need Mature for the opening shots. Tony was as upset as I was and promptly began to check on the whereabouts of our missing star. He called back to inform me that Mature had arrived in London, enjoyed our hospitality at the Savoy, and left with his stunt man for the train station, but he never made the train. He disappeared into the city as mysteriously as a London fog. How anyone as well known and as big as Mature could disappear was an enigma, but disappear he did, and I had to start without him.
Our first-day schedule called for scenes of the exterior of the Yankee fort now held by the Confederate troops. Our opening shot was Victor Mature riding up to the fort, where he requests food and water for his men. They are hungry and desperately thirsty after their arduous trek across the deserts of New Mexico. The fort is the only oasis for miles, and the men are without water. The Confederate troops (dressed in Yankee uniforms) prevent them from entering the fort. Their captain (Jim Philbrook) refuses the request for water, and a fight takes place between the two groups.
Had Mauture been there it would have been an easy day of work in preparation for our grueling schedule, but he didn't show up. How the hell do you shoot a movie without your leading man who appears in just about three-fourths of the picture? I didn't know the answer, but I had to get by. We shoot three of the five weeks allotted for the film without our star, and to this day I don't know how we achieved that almost impossible accomplishment.
Posted by William Connolly at 10:41 AM