Broderick Crawford in THE CASTILIAN 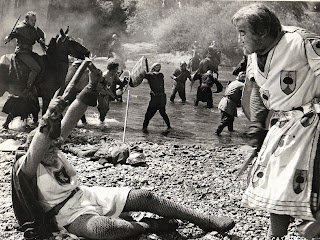 From: SO YOU WANT TO MAKE MOVIES
My Life As An Independent Film Producer
by Sidney Pink

We ended principal photography with only ten days left to finish with Cesar. We needed to complete his battle close-ups as well as his voice dubbing in that time, due to his absolute commitment to report to the DONOVAN'S REEF location for immediate shooting. Thanks to the wizardry of Rich Meyers, and to the luck that brought Al Wyatt to Madrid to direct the action scenes of ROMAN EMPIRE for Bronston, we met the deadline. Gentleman that he always was, Cesar promised to return or do anything that might be necessary for completion. He volunteered to do it with no further payment and he meant it - a truly remarkable man.
During the early days of production, we were confronted with our last casting problem. The cameo role of King Sancho of Navarre, the hard-drinking monarch of that kingdom, was the last role open for an international name. It called for an actor of real stature, and the scene in which he destroys the wine cellar of the Castilian lord who was protecting Fernan Gonzales could yield an Oscar for supporting actor. I had not cast the part because I saw it as a perfect vehicle for Broderick Crawford whom I met on GOLD LOVERS.
I don't suppose there are too many people now who remember how important Brod Crawford's name was in 1963, but he was one of the few "name" actors who had accepted and joined TV, and his series was being played all over the world. He was popular in every major country, including Japan. Getting Crawford not only meant acquiring prestige and a fine actor, it also meant additional box-office dollars. I waited until the last possible moment to cast the role in the hope that I could get Brod for the part.
I discussed the part with Paul Ross, who continued as our press agent and represented Brod as well. Paul told me Brod Crawford was remarrying and wanted to come to Europe for his honeymoon. If I could coordinate our shooting schedule with his free time, he would come to Spain with his bride. When I inquired what he would cost, I was told he wanted two round-trip first class fares, all expenses in Madrid paid for, and $5,000 for incidentals to be paid to him in cash on his arrival. Despite Espartaco's attempts to stop me, we changed our schedule to get Brod Crawford's entire role shot in one week.
We got even luckier: Brod called to tell me he had been able to clear three weeks of hiatus time and would arrive early. He arrived at the Barajas airport with his young wife of forty-eight hours; she was breathlessly excited and he was hopelessly drunk. There was no nicer person than Brod Crawford, and he was in the same professional class as Cesar Romero, but he was an alcoholic. His normal breakfast consisted of a mug full of the most powerful of Spanish brandies (150 proof) covered with about two teaspoonfuls of coffee. For the rest of the day he nursed either Scotch of brandy in a bottle he always carried with him.
We tucked him into bed at the Hilton upon his arrival and kept him sober for two days while he went over the script with us. He gave us his word he would be sober for the big scene where he played the drunken king. He promised not to touch a drop for twenty-four hours before the scene, in exchange for our commitment to allow him full freedom to do as he pleased at other times. Brod was a real pro, and he never missed a call or scene. The problem with his drinking was his inability to speak lines. He not only forgot them, he was unable to speak intelligibly even though he could go through all the action the scene required. Everyone loved that big, shaggy, warm-hearted kid.
The whole Brod Crawford incident ended badly. He came into his big scene cold sober and proceeded to fluff every action. After three hours of failure, we gave up and let him drink again. He got through the scene, but we never knew what he said for dialogue. The only thing that saved the voice dubbing was his very distinctive gruff voice. Everyone knew it was Brod Crawford talking so the bad lip sync got by. I liked Brod, but I swore never to work with a drunk again - until I met Victor Mature.
Posted by William Connolly at 6:21 AM