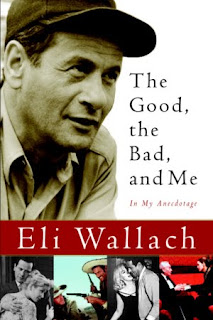 From THE GOOD, THE BAD, AND ME
In My Anecdotage
by Eli Wallach
I actually met Fellini later on a trip to London at the Carlton Hotel, where he was casting a new movie and wanted to discuss the possibility of my starring in it. He was a great storyteller, and I was mesmerized by the film he described. The story was about a cellist who is supposed to appear at a concert in Venice. The cellist explains that he has business in Rome but would fly up to Venice rather than take the train. The orchestra conductor agrees. But the cellist's plane crashes in a strange white city - everything in the city is white: the automobiles, the streetcars, the hotels. The cellist survives the crash and asks a policeman dressed in a white uniform how to get to Venice so that he can appear at his concert.
The policeman takes out a book and reads from it: "All your life has been recorded on film," the policeman says, "and applicants for leaving this city must appear at a screening room where you will watch as your life unrolls on the screen. If an unselfish moment appears, the film will be stopped. The unselfish moment will be clipped out of the roll, then attached to your passport, and you will be released.
The cellist watches his film in amazement. At one point during the film, he sees himself stopped at a traffic light. to his right, there is a beautiful woman in a white car with a handsome white puppy. The puppy sticks his tongue out at the cellist, and the cellist, for no particular reason, sticks his tongue out at the dog. The film is stopped; the tongue-wagging frame is cut out of the film and attached to the cellist's passport, and the last scene of the film shows the cellist sliding into his seat at the Venice concert hall as the conductor raises his baton.
I thought the idea of Fellini's film script was wonderfully fanciful. I asked him why he was talking to me instead of Marcello Mastroianni. "I love him," Fellini said, "but I feel it is time to use another actor with whom I can fall in love." We parted, and I never heard from him - I later learnded that Fellini had also been interviewing such British film stars as Paul Scofield, Alan Bates, and Albert Finney, but the film was never made. As it turned out, Dino De Laurentiis, the prolific Italian film producer, became so excited when he heard Fellini's story of the cellist, the dog, and the unselfish moment that he spent three-quarters of a million dollars building the set of the white city where the cellist's plane crashes. But Fellini, who was quite superstitious, told De Laurentiis that he had a dream that if he made the film, he would die. De Laurentiis didn't pause: "Federico," he said. "I didn't have a dream, but if you don't make this film, you will die." The dispute continued in court, and Fellini did not make another movie until Alberto Grimaldi, who also produced THE GOOD THE BAD AND THE UGLY, heard of Fellini's plight, went to De Laurentiis, and wrote him a check for $750,000. The lawsuit was dropped, and Fellini made his next three films with Grimaldi. He never made the film about the cellist, though, and I never got the chance to appear in a Fellini film.
Posted by William Connolly at 8:11 AM