Cesar and Espartaco during THE CASTILIAN 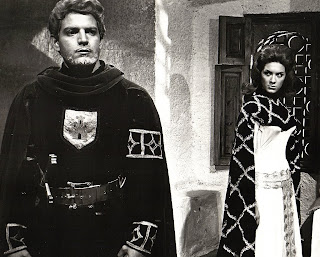 From: SO YOU WANT TO MAKE MOVIES
My Life As An Independent Film Producer
by Sidney Pink
These were only a few of the early problems that plagued us in our nineteen weeks of principal photography. VALLEY was the most difficult picture I worked on, but I learned what not to do, and the project had its compensations as well. Cesar Romero was a real delight. He is a gentle and intelligent man, and we spent many evenings together in quiet conversation over coffee and the fine Spanish brandy. He talked about his early days in the actor pool of 20th Century Fox with Tyrone Power, Don Ameche, Betty Grable, Alice Faye, and Rory Calhoun. I shall always like Cesar Romero, and in fact, he is one of the most loved and respected actors in Hollywood. It was he who got me to grow the first and only beard I have ever worn. The part of Jeronimo called for a full beard, so I suggested he grow a real beard to avoid the dawn makeup calls. He reluctantly agreed but only if I also grew one. I did so, and for those twelve weeks I wore it, I was miserable. As the weather warmed up and the beard grew longer, the discomfort increased, and we were both soon counting the days until the damned things could come off. I had the last laugh on him because he received an offer to co-star with John Wayne in DONOVAN'S REEF immediately after completing VALLEY, but he had to keep his beard, this time trimmed to an elegant Vandyke.
Cesar was loved in Spain, but unlike in other countries, his fans there never approached him for autographs nor did they molest him in any way. They just followed him wherever he went. He was quite a sight with his beautiful flowing white hair and magnificent beard, walking along the streets and dwarfing everything and everyone in sight. I am nearly six feet in height, but somehow I looked small when I was with Cesar. Those evening walks were a genuine pleasure for me after my daily battles with Espartaco.
I took a vow I would never again get involved with anyone like Espartaco Santoni. After the first few weeks of insecurity, when he allowed us to carry the ball and organized the confusion, his ego mounted daily with the knowledge the picture was back on schedule and moving well. He finally scored with Tere Velasquez, but his nightly visits with her did not make him any easier to live with. Even vainer that she, he constantly demanded our makeup woman between every scene; he carried a mirror with him to check his hair and make sure of his beauty.
He became one giant pain, but when he began to throw his weight about by abusing Cesar Romeo, all of the crew lost respect for him. To show his power, he ordered Cesar to be on the set every day even when he wasn't scheduled. During all of this Cesar remained his usual quiest and patient self, sitting quietly reading a book of talking with me. His forbearance soon won him the title of San (Saint) Cesar from the crew, and their dislike for Espartaco grew daily.
The stuff hit the fan when Espartaco decided he would not accept the lines of Jeronimo read by the script girl; he insisted they be read by Cesar personally. No one ever asked that of another actor unless the lines were needed for timing of were to be used in a direct soundtrack. It was like deliberately degrading that fine professional in front of the whole crew. When Cesar got up to do as requested, I blew my stack.
I had kept my cool because of Cesar, who refused to let it bother him. But now I told Espartaco in my best four-letter-word Spanish what I thought of him. I indicated that Cesar Romero and I, together with all of the American production team, were walking off the set. We would not return until he made a public apology in front of the whole crew, and we were prepared to take him to court to make certain the picture would never see the light of day. When I finished, there was a burst of spontaneous applause that must have reduced Espartaco to the pygmy he was. An hour later we were back on the set to receive his ill-given apology. From that day on, Espartaco Santoni and I shared a mutual hatred.
Luckily for us, Espartaco had no scenes with Frankie Avalon so he never even met him. Frankie's scenes turned out exceedingly well; Seto was content to let us control the way Frankie was presented. Espartaco had only one scene with Valli, and she treated him as if he wasn't there. He was on his best behavior with Tere, and he treated her as he would a real queen. By now his affair with Tere was public knowledge, even to Maruja. She appeared on the set for a weekend in Burgos but left a few hours later in tears.
Espartaco married Tere Velasquez after destroying Maruja, but that too had only a brief life. They had a child, but Tere could not stand his lies and infidelities, so she booted him out and went back to Mexico. I still can't understand what it is about showbiz that tolerates these kinds of parasites for as long as it does.
Posted by William Connolly at 9:44 AM