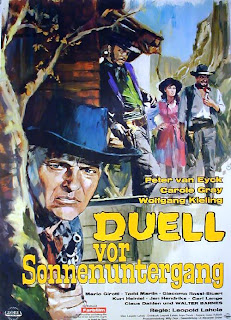 DUELL VOR SONNENUNTERGANG
U.S.: DUEL AT SUNDOWN
Director - Leopold Lahola 1965
Cast: Peter van Eyck (Don McGow), Carole Gray (Nancy), Wolfgang Kieling (Punch), Mario Girotti (Larry McGow), Todd Martin, Giacomo Rossi Stuart,Deineler Bitenc, Kurt Heintel, Jan Hendriks, Carl Lange, and Walter Barnes (Vater McGow).
Screenplay by Leopold Lahola, Anya CorvinBased on an idea by Inarek Blasko and Leopold LaholaDirector of Photography Janez KalisnikMusic by Zui BorodoAssistant Director Dragoljuh SlojanovicScmilt Wolfgang WehrumProduction Manager Willy ZeynDesamlletung Dr. Alexander GruterA production of Corona Filmproduklion G.M.B.H. Munich And of Eichberg G.M.B.H. MunichIn collaboration with Jadran Film, ZagrebDistributed by Omnia Deustche Film – Export G.M.B.H.
If someone wanted proof that all Westerns made by Germans weren't like the Winnetou films, this movie would do the trick. Unfortunately, what this movie was wasn't good.
Older son Don McGow was put in charge of the cattle drive. However, an argument with his younger brother, Larry, sent Don away to cool off. Returning, Don found the cattle stolen, the foreman dead, and Larry missing. Soon, our hero set off to discover where was the herd and what had happened to his brother.
With a plot that promised alot of action and emotion, this film delivered a listless pace and absolutely no involvement. At time the actors seem to have been directed to not react to what was going on around them, making audience identification difficult at best. And what little action was presented, was so poorly staged that one couldn’t help but wonder what the filmmakers thought they were achieving.
Fans of German actor Peter van Eyck would probably be astonished to find out that he played the hero of a Western, and from his performance here, it would appear that he wasn't very comfortable with the idea either. Aside from an overdone costume - which included chaps, an unweathered vest, huge gloves and a black hat which flapped in the wind - van Eyck didn't look healthy, let alone virile enough to work as a cowboy. His usual aristocratic manner, which perfectly suited the military and espionage parts he often played, seemed at odds with the rough character needed for this story. And having him next to Walter Barnes made the concept of van Eyck being a son very unconvincing.
In reality, Peter van Eyck was born in 1911, about seven years before the 1918 birth of Walter Barnes. Van Eyck died in 1969, about four years after this movie, but not before making at least fourteen other films, including THE SPY WHO CAME IN FROM THE COLD and SHALAKO.
As the ranch owner, Barnes provided sincerity for the part of a father worried about how his sons were growing up. The filmmakers didn't provide much for the actor to do, but he provided what little credibility their movie had.
In an attempt to make Barnes believable as van Eyck’s father, the filmmakers added gray to his hair and beard, and had him walk with a limp. Unfortunately, the American looked like he was trying to play older, which only focused more attention on how healthy and virile he appeared next to van Eyck.
Italian actor Giacomo Rossi Stuart, already a veteran of a few Italian Westerns, appeared in the small role of the foreman. That the producers wanted to add him to the mostly German and Yugoslavian cast was odd, especially as they didn't give him much to do. But his was always a welcome presence.
Probably the most interesting element of this film was the actor playing Larry McDow; Mario Girotti. This was one of five German Westerns in which this fellow appeared. Two years later, he would dye his hair blonde, adopt the name of Terence Hill, and become a big star in Italian made Westerns. Here, he showed a little of his star quality with his brilliant smile and casual athleticism - he vaulted over fences and onto horses with ease. However, the role of Larry was not the sort of part to bring him to the attention of a very wide audience. But, at least, it didn't prevent him from going on to bigger and better things.
(Thank you to Ally Lamaj for helping me to see the German language version of this.)
Posted by William Connolly at 12:35 AM