A Disastrous First Day On THE CASTILIAN 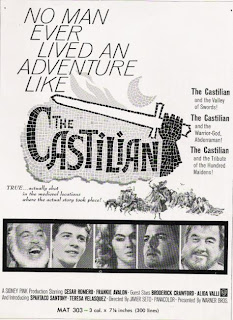 From: SO YOU WANT TO MAKE MOVIES
My Life As An Independent Film Producer
by Sidney Pink
I was soon up to my neck in a new set of problems. I was accustomed to the well-disciplined Dutch and American crews, who were always set up and ready for each shot before the director had finished rehearsing his actors. As a director, I knew the importance of being ready with a complete shooting plan for each day. The director has to set up his camera placement showing the cameraman the action he wants. Only then can the cameraman set up the required lighting. The sound engineers must also be prepared so that they can cover the set for sound no matter where the actors position themselves.
This complexity means that most of the time on a movie set is used in preparation. The actual shooting time of each scene is rarely more than six or seven minutes, but to get a complex six-minute shot can require two hours of preparation. They key to speed is a well-prepared director with a well-planned shooting script. In the States, they now make a story board that visually depicts each scene the director wants to film. In Spain, it seemed, no one is prepared. At least, that is the way we started out.
We arrived at 6 A.M. to begin shooting. For a first day, the scene selected was stupid. Taken from the middle of the script, it involved Fernan Gonzalez and a group of his followers standing on a hill overlooking the village of Covarrubias. They were discussing the next guerrilla raid against the Moors. It was a most complicated scene requiring horses, action, and a lot of dialogue. I was trained in the school of easy start, the first day being dedicated to doing easy scenes to give the cast and crew a chance to know each other and work out any possible personality problems. The makeup and wardrobe technicians need to learn their actors and their possible allergies before they became problems. It is just like a shakedown cruise wherein the crews and officers must learn each other's demands before they can reach any level of compatibility. That opening day was true chaos.
It became obvious that Seto and Pacheco had not discussed in advance the way this picture should be shot. While they worked together on many previous occasions, neither had ever undertaken such a gigantic project. Seto's experience was confined to small, intimate films that required very little production preparation. He was at a total loss when he saw the size of the crew and the huge expanse of the outdoor scenes that made up most of the picture. There were only a very few intimate scenes in this script, and his lack of experience in epic productions was evident to all of us. On that first day, he was unable to set up one camera shot, and he spend the whole morning with Pacheco trying to decide his first mastershot camera placement.
At the risk of sounding professorial, let me explain that norm of European production. Unlike Americans, European filmmakers would not depart from the customary under any circumstances. It was only after the American technicians arrived in full force that they learned to change their technique. Routine demanded that a master shot of the entire scene be made first; then you could move in to medium and close-up shots. If a master cold be shot in one take, then that was the way it was done. Techinque called for two medium shots, then close-ups. Action and movement needed for cutting all had to be shot later. The theory was based on using the master shot to set the tempo and overall feeling of the scene, and then other shots are cut in to accentuate the dramatic impact and round out the scene. Almost all conventional European directors shot their films in this fashion. No one thought of the realism of a hand-held camera; only the daring, unorthodox leftists like Rossellini, Fellini, and DeSica used their cameras in action like an additional actor. The use of the camera to indicate mood and suspense was not for Seto or any of the other journeyman directors. I knew we were in deep trouble.
Posted by William Connolly at 6:08 AM