Getting a star for FINGER ON THE TRIGGER 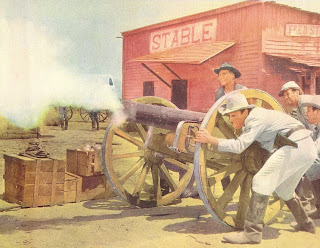 From: SO YOU WANT TO MAKE MOVIES
My Life As An Independent Film Producer
by Sidney Pink
Spain contributed the cameraman (Antonio Macasoli), the cutter, three Spanish leads, the lab and sound studio, and all of the exteriors. The American contribution consisted of the lead, the director, and most of the supporting cast. We used almost every American actor in Spain in FINGER ON THE TRIGGER, and it looked, smelled, and tasted like the real thing. Since I was almost completely broke and if I didn't work I wouldn't eat, I named myself as the director. There was no other director around who had ever done a Western, so there was no argument. I paid myself $10,000 for the job and was able to survive. We still needed a star.
Tony Recoder submitted a list of the William Morris stars available for the picture; it included the name of our unanimous choice, Victor Mature. Mature (a former larger-than-life star) appeared in some of Hollywood biggest epics and was still a box-office draw in Europe. He hadn't worked for a long time, but I didn't know why and neither did Tony. We started negotiations, and he agreed to work six weeks for $25,000 to be paid in full in advance of his arrival. We compromised by putting the money in an escrow account controlled by the Morris office, and Mature signed the contract. Signing him for the first Western ever made in Europe was a great coup for Spain and for the future of Westerns in Europe. Mature had made many Westerns, all with important co-stars and his name was associated with big-budget outdoor films. Then we learned why he was available. He issued a series of demands immediately after the money was deposited.
But first, in order to eliminate all traces of our previous failures, Sacristan and Recoder insisted that FINGER ON THE TRIGGER be made under a new banner, and thus FISA was born. The initials stood for Films Internacionales Sociedad Anonyma, and the company was duly formed and registered as a film producer under Spanish law. The owners were Mole Richardson, Antonio Recoder, and Pepe Lopes Moreno as my representative. We subleased my headquarters at San Telmo to the new company, and all my equipment was turned over as the cost of the stock received by Lopez Moreno. We then started scouting for appropriate locations.~Luis de los Arcos led us to the southernmost part of Spain to a city named Almeria, located east of the Costa del Sol and Malaga but west of the Costa Brava and Barcelona. The city, actually a small Moorish village, sat on the Mediterranean coast in the most arid part of Spain, totally ignored by the Spanish. The roads to Almeria were tortuous and pothole-ridden, and some were totally unpaved. The area surrounding the town was Arizona, New Mexico, and Nevada rolled into one - a barren wasteland unmarked by anything more than a scrub and sagebrush for mile after mile. To quote Rory Calhoun, it was "acres and acres of nothing but acres."
Even in the so-called winter the place was hot. The sun blazed down from a normally cloudless sky like a huge blast furnace, and one any summer day you could actually fry eggs on those rocks. It was more like the American West and the American West, and it was to become the location for more Western movies than any place outside the U.S. itself. It had sand dunes and valleys, peaks and canyons, but above all it had no telephone poles or any other visible accouterments of twentieth-century civilization. In short, it was perfect for shooting outdoor Westerns.
LAWRENCE OF ARABIA was the first movie to be shot in that remote part of Spain. The dunes and the desert battles were shot in the sands of Almeria. There were plenty of horses around, since the area was populated mostly by gypsies who owned at least one horse per family. Perhaps not our Western cayuses, but a horse is a horse is a horse. Anther plus was that those gypsies made sensational Indian extras. Thus a new Hollywood Western location was discovered, and we were ready to shoot.
(Pink's calling FINGER ON THE TRIGGER "the first Western ever made in Europe" is contradicted by his earlier report that the Germans had revived the Western with the Winnetou films. FINGER wasn't even the first English language Western made in Spain - the Michael Carreras directed SAVAGE GUNS was made in 1962 and starred Hollywood actors Richard Basehart, Alex Nicol and Don Taylor.)
Posted by William Connolly at 8:50 AM