Sidney Needs To Make A Western In Spain 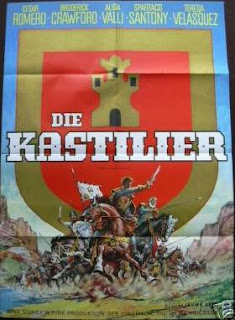 From: SO YOU WANT TO MAKE MOVIES
My Life As An Independent Film Producer
by Sidney Pink
(After the success of THE CASTILIAN, Pink produced PHANTOM OF THE FERRIS WHEEL, aka PYRO, aka WHEEL OF FIRE, directed by Julio Coll, which did well. Next came ROMEO AND DELILAH, aka DELILAH, aka OPERACION DALILA, directed by screenwriter Luis de los Arcos, which turned out so badly that Pink could not find a distributor for it. In desperation, Pink needed to make money and an opportunity to make commercials for Pepsi in Spain for the Spanish speaking market rescued him.)
I still didn't have enough money to develop any further projects and was almost at the end of my rope when I got lucky again. On one of my visits to Rome I met Vittorio Annibaldi, who suggested a coproduction between his Italian company and our Esamer. It was a great idea, but since neither of us had any money, it never got off the ground. Now he called me with the news he had concluded a deal with an important Italian distribution company to make a Western, but he had no knowledge of how or where to start. He assumed that as an American producer, I would know how to make a Western feature, and he needed my expertise.
Although I had learned a great deal on the Tex Ritter sound stages, I really didn't know too much about the production aspect, but I was able to bluff my way through his avid questioning. I had one little problem: I needed $50,000 (3 million pesetas), a very substantial sum in Spain, and I had no idea where to find the money.
Then I met Jose Lopez Moreno, a young roly-poly Spaniard with a strong desire to become a film producer. Jose, or Pepe as he was called, worked around the fringes of showbiz in Spain, but he had never been involved in anything really significant. Although he had no money, he purportedly was able to find folks who would invest in projects that promised tremendous returns. Pepe introduced me to Gregorio Sacristan, the head of the Spanish division of the Mole Richardson Equipment Leasing Company. Mole Richardson, a London-based company, was one of the largest suppliers of motion-picture equipment, with branches all over the world including Hollywood, California.
I met with Gregorio, who was very interested in getting involved with Spanish-American coproduction. Sacristan was a thin, nervous Spaniard of obvious Moorish ancestry. He was swarthy, with coal-black eyes which (almost like Las Vegas dice) darted about nervously. He always wore a worried expression, which I later learned came from a severe gastric ulcer. He was a complete workaholic, and his office hours were all day every day, including Sundays. Gregorio tried to play it tough, but he was really a pussy cat. I am sure part of the problem causing his chronic ulcer was his desire to be a ruthless tycoon that clashed constantly with his innate inability to take advantage of anyone. Gregorio was too heavily endowed with the milk of human kindness, which others around him constantly curdled.
Tony Recoder was the attorney of record for Mole Richardson (it seemed he represented every American of British company in Spain), so he did nothing to discourage the potential wedding of Esamer and Mole Richardson of Spain. I think Tony Recoder was possibly the greediest man I have ever known. His insatiable ambition was not soley for money and prestige; to him it was of extreme importance to be involved in every deal made in the Spanish movie world, a goal he came awfully close to reaching. Tony was about five feet ten, with a small mustache that was annoying in its precision and neatness. (It seemed to have exactly the same number of hairs on each side of his nose.) His reputation was no worse than the average Spanish lawyer, but in contrast to how I felt about Luis Sanchis, I never really trusted Tony. His hair was black and he was a good-looking Latin type. I am sure the ladies loved him, but I never liked Tony.
Gregorio and I, together with Tony and Pepe, negotiated for weeks with little or no success until another stroke of luck hit us. The legendary Buster Keaton was in Spain shooting A FUNNY THING HAPPENED ON THE WAY TO THE FORUM, the case of which included almost every great comic of the era. Pepsi-Cola America was introducing its new drink, Bubble-Up, to compete in the non-cola market dominated by Seven-Up. The goal was to launch the product with a huge comedy campaign, and someone in the creative department came up with the idea of using Buster Keaton as the personality to introduce it.
(Pink made the commercial, loved working with Buster, and had some money for the movie project.)
Now that I was able to approach Mole Richardson with a cash participation of our own, we made a deal. Mole Richardson would invest their materials and cash up to 5 million pesetas, while we were to put up the equivalent of $25,000 in either actors or cash. The film had to be a Western. We were to sign an internationally recognizable name as our lead and provide the director. Annibaldi got distribution rights to Europe and we retained rights to the rest of the world. Total budget for the film was $200,000 (14 million pesetas), large for a Spanish film.
Posted by William Connolly at 9:06 AM