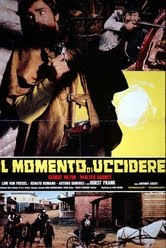 IL MOMENTO DI UCCIDERE
THE MOMENT TO KILL
French: LE MOMENT DE TUER
German: DJANGO-EIN SARG VOLL BLUT
DJANGO A COFFIN FULL OF BLOOD
Director - Anthony Ascott (real name: Giuliano Carnimeo) 1968
Cast: George Hilton (Lord), Walter Barnes (Bull), Loni von Friedel (Regina), Renato Romano, Arturo Dominici (Forrester), Rudolf Schundler (Judge Warren), Remo De Angelis (Dago), Giogrio Sammartino (Trent), Carlo Alighiero (Forester), Ugo Adinolfi, and Horst Frank (Jason Forrester).
An Italo-German Coproduction
P.C.E. Produzioni Cinematografiche Europee, Euro International Films (Rome), Terra Filmkust (Berlin)Produced by Vico Pavoni
Story by Tito Carpi, Enzo G. Castellari
Screenplay by Tito Carpi, Francesco Scardamaglia, Bruno Leder
Set Designer Alberto Boccianti
Costumes Enzo Bulgarelli
Assisted by Stefano Bulgarelli, Francesca Romana Cofano (c.s.c.)
Assistants to the Director Fabio Piccioni, Hans Billian
Continuity Vittoria Viscrelli
Production Inspector Cecilla Bigazzi
Cameraman Mario Pastorino
Assist. Cameraman Michele Pensato
Sound Engineer Massimo Jaboni
Make-up Sergio Angeloni
Hair Stylist Lina Cassini
Editor Ornella Micheli
Music by Francesco De Masi
Directed by the composer
musical copyright National Music-Milan
The song "Walk By My Side" by De Masi Alessandroni-De Mutisis sung by Raoul
English version Criterium Production
Syncronization C.D.S.
Filmed at the Cinecitta Studios
Director of Photography Stelvio Massi
Technicolor - Techniscope
Production Manager Dino Di Salvo
Distributed by Euro International
Missing gold was not an unusual catalyst for a Western plot, so perhaps these filmmakers felt that doing the old story in Western costuming, but with the look and atmosphere of an "Old Dark House" thriller would make it unique. Perhaps it was, but they should have made certain that an audience had something to care about before spending so much time on guys creeping around in the dark.
Creating the characters of Lord and Bull, a duo of former confederates who became hired gunmen, and then casting the roles with George Hilton and Walter Barnes, was a step in the right direction. But these were the kind of characters suitable for an expansive adventure story, not guys about whom suspense could be generated in an "hide and seek" gun battle.
Director Giuliano Carnimeo and Cinematographer Stelvio Massi came up with a stylish look for the film, with unusual camera angles and inventive staging. But, in collaboration with Editor Ornella Micheli and Composer Francesco De Masi, they weren't able to give this enough of a pace to keep things from getting pretty dull. There was plenty of time for sharp audience members to guess all of the upcoming plot twists. What perhaps wasn't predictable was the odd freeze frame ending.
There were many familiar faces to enjoy seeing again, but no one delivered a really notable performance. The casting of Arturo Dominici as Horst Frank's father was an interesting decision, but unfortunately it didn't pay off with an interesting result.
Walter Barnes expressed regret over his performance as Bull. He felt he could have done so much more with the role, if he hadn't been so distracted by the divorce proceedings brought against him by his wife in Germany.
(Thank you to Eric Mache for a chance to see the English language pre-record from Holland.)
Posted by William Connolly at 9:01 AM