Eli and the last of Leone 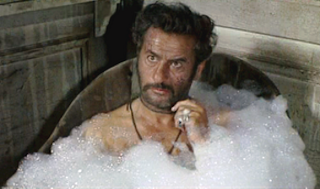 From THE GOOD, THE BAD, AND ME
In My Anecdotage
by Eli Wallach
After all of the months spent in Spain, it was good to get back to Rome. Leone threw a lavish dinner party for us at the Eden Hotel and reminded us that he would be in New York for two months, where Van Cleef, Eastwood, and I would be required to dub the dialogue that was on the rough cue track. Months later I met Leone at a voice recording studio in Manhattan. At the studio, I was happily surprised to find that my old friend Mickey Knox was on hand to work on the dubbing as well. Knox, affectionately known as the Mayor of Rome, had settled in that city after being blacklisted in Hollywood. Mick was a tough bird - willing to lock horns with anyone who irritated him. He was a master of adpating screenplays from Italian to English; his credits were enormous - he'd worked with Leone, Orson Welles, Fellini, Mastroianni, Vittorio De Sica, and Anna Magnani.
The big problem with THE GOOD THE BAD AND THE UGLY was its cue track - like a master detective, Mickey labored over all the lines spoken by Eastwood, Van Cleef, and me. Leone owed Mickey a medal for his work. Mickey taught me how to lip-sync, how to capture the emotion of a scene in a studio. In one scene I was sitting on my horse, yelling my lines - horses hate the hot sand and this one was not cooperative. This was not an easy scene to recapture while sitting on a stool in a recording studio in New York. "Just yell the goddamn line," Mickey reassured me. "We'll take care to match your yelling with what's on the screen."
Some time later, Henry Fonda called me in New York and told me that there was an Italian film director who wanted him to appear in a Western in Spain. "Is it Leone?" I asked. "If so, by all means take the job; you'll enjoy working with him."
"But he wants me to play the villain," Fonda said. "I even have to shoot a young boy."
I told him it would be a change of pace for him. "It's called ONCE UPON A TIME IN THE WEST - what the hell does he know about the West?" Fonda asked.
"You'd be surprised; take the challenge," I said. He did and the film turned out to be a success; Fonda even called to thank me.
A year later Leone came to America, this time to scout locations for a film that he would make only many years later - ONCE UPON A TIME IN AMERICA. I took him to Brooklyn and showed him around Red Hook and Little Italy. We walked around my old neighborhood for hours, stopping in front of the store my mother and father once owned on Union Street, my old school, and the boys' club where I first knew I wanted to become an actor.
Leone stayed in touch. "We will make more movies together," he said. "I keep my promises."
One time he called me and said he wanted to make another Western in Spain called DUCK, YOU SUCKER (GIU LA TESTA). He told me that there was a wonderful comedic part in it for me. I explained to Leone that I had a conflict with the dates of production - I was supposed to do a film in France with Jean-Paul Belmondo - but Leone pleaded with me. "Please agree to do my movie, please," he said. I foolishly turned down the film I was offered and agreed to star in Leone's.
Leone went to Hollywood to try to raise money for "our picture" - I thought it was a grand gesture that he referred to it as "ours". In California the studio he was going to work with asked him about the cast. He told them that he had Eli Wallach in the lead role. "No, no," he was told. "We have an actor, Rod Steiger, who owes us one more picture on his studio contract. You'll have to use him; otherwise we can't put up the financing."
Leone agreed. "Sorry, E-li," he told me over the phone. "But I have to use Steiger." I told him that I had had to turn down the other film and now lost out on two jobs. I asked if he could at least give me a token payment.
"I'm sorry," Leone said. "But I have to do what the California producers want."
"I'll sue you," I told him angrily.
"Get in line," he said, and slammed down the phone.
The breaking of that connection also broke our relationship. We never spoke again.
Leone may have ultimately won our battle anyway. Since THE GOOD THE BAD AND THE UGLY was an Italian film, I was not entitled to any residuals (in America an actor receives payments when the film is replayed on TV). I'd be a multimillionaire if I had stuck that clause in my Italian contract. As the French would say, "C'est la goddamn guerre," or, to quote my first theatrical agent, "That's life in the Balkans."
Posted by William Connolly at 7:56 AM