An editor for THE CASTILIAN 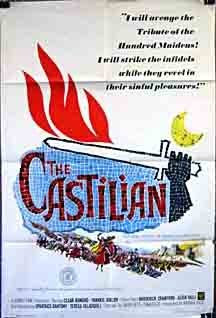 From: SO YOU WANT TO MAKE MOVIES
My Life As An Independent Film Producer
by Sidney Pink
Seto hadn't the vaguest idea how to stage or photograph a battle scene. Every attempt he made ended in disaster and we soon gave up, realizing we would have to save all of those scenes until the end of our schedule. Originally, our film editor was a French woman in her sixties who went by the affectionate name of Senora Madame. She was a very capable cutter and her technique was good enough for any Spanish film, but like Seto, she was in over her head when it came to our picture. We needed a film editor with the ability to edit battle scenes and create the faster tempo needed for international audiences.
Let me illustrate what I mean by tempo. In European productions, customary cutting called for, say, an actor to walk down a hall, open the door, enter and close the door; and then for the cut inside the room matching the door closing to show him actually inside the room. This kind of cutting slows action too much for American audiences, who are accustomed to being told a complete story in a thirty-second commercial. American cutters show this same sequence of events by following the actor into the hall, cut to a close-up of the door, and then show the actor talking to whoever he went to see. Our audiences do not need a complete explanation to accept the fact and the process of the actor entering the room.
I was having a real problem explaining to Senora Madame Ochoa we could not accept her Spanish-French cutting technique and had to use a different approach. While I was in the States, I met a film editor recommended to me by Eddie Mann and Freddie Berger. His name was Richard Meyers and he was eager to get to Europe. At this time almost all the production activity worldwide was in either Rome or Madrid. Spain had taken over as a center due to its excellent climate and terrain. You could find any outdoor background in Spain, from the frozen Russia of DR. ZHIVAGO to the deserts of LAWRENCE OF ARABIA.
At any rate, Rich was very ambitious, not content to remain an excellent film editor. He had his heart set on becoming a producer-director. He was, however, amenable to the deal I offered, and he came to Madrid with his family to take over as associate producer and supervising editor of the picture. Again the unreal importance of titles in this crazy showbiz world worked for me. Rich was content because he was not merely a film editor, and Madame was happy because she was still officially the only editor on the film. Nothing changed - each had the same job, but they were both content because they saved their faces through titles.
With Rich in charge, we were able to keep Seto in touch with his coverage, and thanks to his able cutting and production savvy we had very few problems in that department. Now I was able to concentrate on the other miseries in progress.
Espartaco determined that no matter what the cost he would even the score with me, and he caused furor after furor until Emiliano Piedra re-entered the scene. He came as the representative of a now wide-awake Maruja Diaz. When she saw the assets of her company squandered by the obstinacy of the man who had posed as her husband (we learned they had never been married), she called upon Emiliano, who was scrupulously honest and Maruja's best friend.
On her behalf, he quickly executed an agreement with us for our guarantee of completion in exchange for production control. Under Spanish law, final control resided in the Spanish co-producer. What Maruja needed was assurance that Espartaco, who was not a Spanish national, could not in any way conspire with us to defraud her of her company and its share of the film. After seeing the results of the enmity between us (we were not two weeks behind), Emiliano advised her to turn over production control to us legally and thus blunt any power held by her ex-partner. And that was the way we finished the picture. Espartaco was now only an actor, and we were able to control him.
Posted by William Connolly at 6:00 AM