Preparing FINGER ON THE TRIGGER 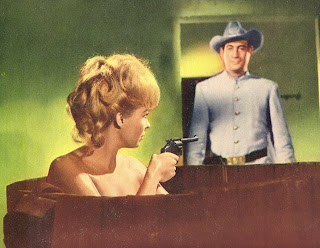 From: SO YOU WANT TO MAKE MOVIES
My Life As An Independent Film Producer
by Sidney Pink
Arthur Brauner and the German production companies had revived the Western through a series of Indian pictures starring Lex Barker. They depicted the German vision of American Indians and bore as much resemblance to our actual history as the German countryside emulated our Old West, but they were huge successes all over Europe and the Far East. They were coining money, and Vittorio was shrewd enough to latch onto the idea and improve upon it. He had no script or story idea, except it had to include Indians and be full of action scenes. I was to provide the script, to be approved by the Italian company, and I had to face the reality that if I failed on this film, I was finished as a producer. My very last cent was going into this final gamble, and I must admit to many qualms about my ability to pull it off. But Cagney was still with me, so "damn the torpedos, full speed ahead."
Although it was Luis de los Arcos who destroyed Esamer, I didn't think it was his fault. He worked as hard as anyone, and the mistake was mine. I should have realized he was unfit to be a director and too inexperienced to handle such a difficult picture. No one could deny Luis' brilliance as a writer, so we collaborated on a script based on his original story of an event that took place right after the Civil War. He called it EL DEDO EN EL GATILLO, literally translated as FINGER ON THE TRIGGER, a whale of a title for a Western. We kicked the story line around together, and in twelve days we had a finished screenplay in English and Spanish...
It was an excellent script for a Western, accepted by the Italians with great enthusiasm but now it needed a star.
First we cast all coproduction requirements. Vittorio chose for his leading lady a beautiful French actress, whose dual nationality allowed her to be classed as an Italian actress. Her name was Silvia Solar and she spoke no English, but her considerable name value in France made her very important to Annibaldi. Silvia promised to learn her part in English so we could dub it more easily. She was not only beautiful, but also intelligent enough to realize this film could get her international attention in this new era of worldwide production. Silvia kept her word and hired an English tutor to help her with her pronunciation. Her part was so well dubbed it actually appeared as though she had done it herself. We agreed to let the picture carry the name of an Italian director for the European market, and so Annibaldi hired a ghost director who was paid for the use of his name. This, together with the script that in Italy and Europe bore the name of an Italian author, fulfilled all the Italian coproduction requirements.
Posted by William Connolly at 6:28 AM