The end of HORROR EXPRESS 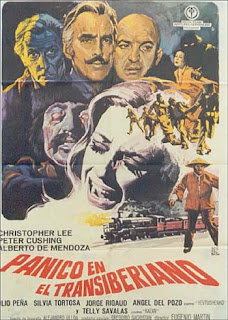 From: HOLLYWOOD EXILE Or How I Learned To Love the Blacklist
by Bernard Gordon
What happened to the film in the U.S. and why didn't I become the king of horror filmmakers?Bobby Marmor's real estate operations in London suffered sudden and serious financial reversals. He could not come up with the money to repay loans from the Banco de Bilbao. All I knew at the time was that Ben Fisz kept hammering at me to get hold of the negative and send it to London so that release prints could be made. Sacristan kept dodging with one excuse after another, but we had a debt of $150,000 to the Banco de Bilbao, money for which Spaniards had signed. The Spaniards were Sacristan and our accountant, Ramon, who were both acting for their British and American backers. Nevertheless, when the money to repay the bank was not forthcoming from London, these Spaniards properly exercised theit rights to grab the negative, which was, of course, in the laboratory in Madrid. They had the legal right to do this since the negative was collateral for the loan. I was told nothing about this at the time, Typically, Sacristan would not tell the truth, dodging with one excuse after another. Our already strained relationship became aggravated.
Because of the financial stress in London, Fisz made a wretched deal to sell the picture to an American company for release in the States for something like $100,000. The company acquiring the film was getting it virtually free - thanks to a tax deal that was in effect at the time. Fisz took the beat-up, faded, miserable, work print, which was all he had in London, made an inter-negative from that, and proceeded to run off release prints! Friends of mine who went to the theater to see the film in Hollywood reported back to me that it was almost impossible to see anything on the screen - everything was dark and unintelligible. I was completely bewildered, because I knew from many hours of fighting for film quality at the Madrid laboratory that we had an excellent negative, one that had been photographed with care and skill. At that time, Yordon had not seen fit to fill me in on these complications. The film he later said could have been a real hit and a moneymaker was trashed.
In 1972, at an international festival of horror films held in Spain, HORROR EXPRESS was up for the grand prize. It lost to an American production, THE OTHER, directed by Robert Mulligan, but HORROR EXPRESS won the consolation prize for best story. This accolade went to Eugenio Martin, who had been listed, for nationality reasons, as the writer of the story - much to Julian's lasting irritation.
What might have been the start of a career I would really have enjoyed was, instead, finished. I may have had what it took to be an effective line producer, but I didn't have what it took to be a promoter. My own effort to promote an independent film in Spain was a dismal failure; I had lived comfortably under Yordan's umbrella too long, doing my share of writing and producing while he did his job of hustling, packaging, finding connections, financing, and distribution. The film operation in Spain folded. The studio was abandoned.
Posted by William Connolly at 8:10 AM