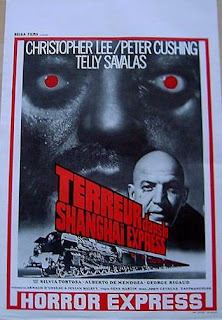 From: HOLLYWOOD EXILE Or How I Learned To Love the Blacklist
by Bernard Gordon

Christmas of 1972 arrived before we were able to finish principal photography. Jean and I decided to have a big Christmas party in the cavernous apartment we had inherited from Yordan. We invited all the cast and principal crew personnel. We served traditional roast turkeys on the buffet table and, another rare treat, a real Smithfield ham we had sneaked out of the American PX. We also had all the other dishes and sweetmeats, both American and Spanish, that we could assemble. The party was a glittering affair. Telly and Sally; Christopher Lee and his handsome Danish wife Gitte, with the nine-year-old daughter Christina; Peter Cushing, polite and cordial, but painfully missing his wife; Eugenio, the director, with the pretty woman he was seeing, a Danish girl he had met when shooting BAD MAN'S RIVER; and all the Americans, British, and Spanish connected with the production.
Feeling alone in this festive gathering and needing to be occupied, Cushing asked permission to carve the ham. He was wearing the white cotton gloves he used to preserve the appearance of his fingers from smoking stains. He did a fine job on what I still remember as the best ham I've ever eaten. The surprise of the party was nine-year-old Christina. We were playing recorded dance music, and in order to start things off, Jean took the girl by the hand and started to dance with her. Christina moved into this enthusiastically and never quit dancing and prancing around the middle of the floor for the rest of the evening. I expected her parents to pull her off and tell her to quit, but both Lee and his wife kept watching the child with keen pleasure. I was puzzled, until someone explained to me that Christina had been born with both feet turned completely backward and had undergone numerous operations in Switzerland to correct the condition. This was her coming-out party. Nothing could have thrilled her parents more than to see her performing on her feet with such ease and to see her, after so much torment, carry on in public like any other happy, spoiled little girl.
Although production was not quite completed, this Christmas party became something like a traditional Hollywood wrap party. Most of the cast and crew were here, feeling good about the film. Work had gone smoothly; there had been no unpleasantness; I felt that the people here liked and respected me and were not merely being deferential because I was the boss. I drifted around as a host offering food and drink, dancing with Christopher's handsome Danish wife and thinking all the while about the years that had passed, the years of selling plastic, of coaxing statements from accident victims, of sweating out the worst assignments with Sam Katzman. I had a keen sense of how fortunate I had been, compared to almost any of the other blacklistees, who had never had an opportunity to achieve any kind of success or gratification. This kind of culmination, a tribute more to extraordinary luck than any special virtue. How else could I explain winding up so happily giving such a Christmas party in Madrid, Spain?
Posted by William Connolly at 7:54 AM