Eli and the Italian style of dialogue recording 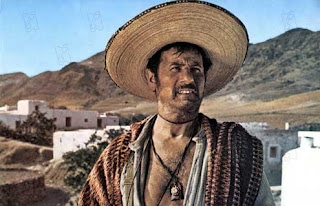 From THE GOOD, THE BAD, AND ME In My Anecdotage
by Eli Wallach
One of the stranger aspects of how THE GOOD THE BAD AND THE UGLY was made was the Italian style of recording the actor's voices using a cue track. As the recording went on, it didn't matter if planes flew overhead, if the wind was howling, or if someone on the crew was cursing somebody out - all of these problems were taken care of in the editing room after the film was finished. Actors could speak their native language - Greek, Spanish, French, German - and they would be dubbed into Italian or English, depending on the country in which it was to be shown. For the Italian release, the man who dubbed my voice had the deep, rich, melodic baritone of an opera star, and whenever I did interviews in Italy, journalists were always surprised by my scratchy voice. In one scene, Leone used an Italian non-actor, a man who had lost an arm in World War II. He was hired to play a one-armed soldier in the Civil War sequence. The man, who was dressed in his Civil War uniform, heard me speaking to Leone in English, shook his head, and said in Italian that he didn't like Americans because he had lost his arm in the war. Calling on my poor command of Italian, I said, "Non fatto questo." (I didn't do it.)
Since the dialogue would be dubbed in later, Leone saw how angry the man was and told him to count to ten instead of delivering his actual lines. "Uno, due, tre," the man counted angrily. "Quattro, cinque, sei, sette, otto, nove, dieci." I guess as he counted, the man must have been thinking about the loss of his arm and my lame remark that it hadn't been my fault. He spat out the numbers and got angrier as he reached the number ten (dieci). When I saw the completed English version of the film at the New York premiere, his performance was brilliant - Leone had dubbed a barrage of curse words over the man's counting, and it worked perfectly. "Damn it," I thought. I'd spent my life learning my craft, going to acting school, joining the Actors Studio, working on Broadway, using the Method, and here was this man who stole a scene from me by counting from one to ten. "Well," I sighed, "that's moviemaking, Italian style." I grew to admire Leone's innovations - he was the man who controlled the rhythm and the pace of the film. As a young man, he had been an apprentice to Federico Fellini, from whom he learned firsthand all the tricks of the directing trade.
Posted by William Connolly at 8:58 AM