The Battles of THE CASTILIAN 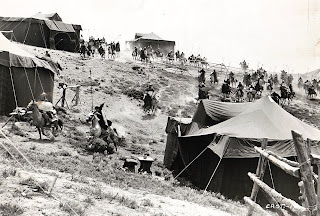 From: SO YOU WANT TO MAKE MOVIES
My Life As An Independent Film Producer
by Sidney Pink
We managed to finish principal photography on time, but we were left with a tremendous number of action and battle scenes to be shot. The only scene of major importance Seto had been able to film was the climactic final battle at Hazinas. We used the actual site of that historic battle and filmed it exactly as the tales of Jerifan related it.
History tells of the Moorish battle strategy of forming their huge armies into a giant crescent composed of their well-armed infantry. The first attack was led by the cavalry, which was reputed to be the finest and most ferocious in the world. After the cavalry herded the opposing forces into a circle of defense, the main infantry attacked in that fearsome crescent which, like a nutcracker, could close around the defensive circle and annihilate the enemy troops, leaving them no escape. This tactic expunged all opposition without any defeats, but Fernan Gonzales found a way to defeat the crescent.
In our final battle, we re-enacted the exact (according to legend and history) battle and tactics involved. Fernan aligned all of his troops in the form of a cross, with the arms reaching almost all the way across the valley. The main body of the cross was a half-mile long file of foot soldiers, twenty abreast, and at the rear of the column was the Castilian cavalry. His plan called for this cross to march toward the Moorish troops; when the cavalry of the Moors attacked, the foot soldiers parted and allowed the Moors to go through. At this point, the Castilian cavalry turned tail and ran, leading the Moors into a small valley where they were ambushed and decimated by expert Castilian archers.
Meanwhile the Castilian cavalry returned to the scene of the battle. The crescent of the Moorish infantry was unable to bend the arms of the Castilian cross to encircle their forces. After a short battle in which the Moors were unable to accomplish what they had been trained to do, they broke and ran, with the Castilian cavalry in full pursuit. Of course, legend had embellished this defeat with all kinds of supernatural help, including visits to earth by Spanish patron saints brandishing swords of fire, but this did not diminish the obvious military genius of the backwater Spanish hero Gonzales. This battle set the high-water mark for the Moorish invasion, but the Moors never got any further. It remains a remarkable achievement.~Our shooting plan called for us to establish the shots with four cameras (again my TV training stood me in good stead) located on two hilltops that commanded a view of the entire valley. Two of the cameras had long focal-length lenses for a master shot encompassing the entire length and breadth of the valley. Their field of vision included all the Moorish troops, numbering 5,000 on foot and 765 horses and cavalry. They were formed in the crescent, with the horses and riders moving across the front of the crescent of infantry.
It was one helluva sight. We had to keep the horses in motion, because most were untrained gypsy plow and work animals who were almost impossible to keep in any kind of order. It took us three days of rehearsals to get those raw extras to obey our commands. Our Castilians numbered 1,300 infantry and 300 cavalry, and it took us five days of rehearsal to get them disciplined enough to form a cross and keep it for the ten minutes required to get the shot. We were finally able to get the two cameras with the deep optical lenses positioned to portray the entire panorama of these two giant armies marching to the attack.
The other two cameras with shorter focal-length lenses were placed where they could pick up much closer shots of the action of smaller groups. This was about all we could do with such a mass of humanity. We decided that after we finished with principal photography of the picture, we would pick up all the close action between the heroes and the villains as well as the specialty action of our stunt men. This proved to be the best and least expensive solution. As I later learned from Al Wyatt and Yakima Canutt, the directing of action and stunt scenes is a highly specialized and difficult job. They should know, they were the greatest at it.
We were finally able to get that big scene on film. It took a total of three weeks of planning, hundreds of thousands of pesetas, and grand-scale preparation for moving, feeding, and housing almost 10,000 people and animals. The final result is approximately five minutes of film. It is spectacular, but I never want to do that again. Perhaps DeMille or Bronston with unlimited budgets and expert technicians enjoyed this kind of filming, but not me. Never again.
Posted by William Connolly at 7:50 AM