The last scene for HORROR EXPRESS 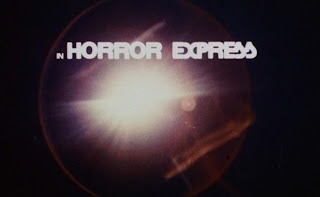 From: HOLLYWOOD EXILE Or How I Learned To Love the Blacklist
by Bernard Gordon
We had one more major sequence to film. To finished off our monster, we would send our train hurtling off a cliff to burning and exploding destruction. In principle, and as written, the train was to be deliberately shunted off onto a spur line that ended at the face of a cliff rising 300 feet above the plain. For some reason that I have never understood, the director and our skilled cameraman insisted it was necessary to scout the area for an appropriate 300-foot cliff. I couldn't convince them. It cost nothing to let them go look. I sat back, knowing that even if they found such a cliff, it would look ridiculous to send our miniatures off it. I also knew I didn't have the money to mount a location shoot for the crash.
In the end, the excellent art director painted a matte of the side of a mountain, then placed that between the camera and the 40-foot tower of our standing set. The model trains were to be pushed off a ramp at the top of the tower; it would look exactly as if they were careening off a very high cliff. After the camera test, and after everyone finally agreed this would work, we still had a problem: we didn't want to wreck our finely made and expensive model trains. Again, the Spanish came to the rescue, tacking together simple wooden duplicates that cost almost nothing. We would shove these duplicate trains off the cliff.
One more battle remained to be fought. I asked the cameraman what camera speed he intended to use. He looked at me, surprised. "Normal. Twenty-four frames."
I shook my head. "If you do that, the whole shot will only last a second or two - the time it takes the cars to fall 40 feet to the ground." He shrugged. (Maybe that's why he had been looking for a 300-foot drop.) "We'll have to roll the cameras as fast as possible," I insisted.
He shook his head. "Then the whole thing will look false. It'll be in slow motion." By this time, the director had joined us and nodded in agreement with the cameraman. Any fool knew this!
"I don't care if it looks that way. We can't have the whole sequence over in a fraction of a second." I was emphatic. I felt odd. Where did I come off to argue with these professionals? I was not an expert cameraman. "How fast can our cameras turn?"
"Two times normal. Not more."
"Can we find a camera in Madrid that will go ninety-six frames per second?"
"I know where there is one," the cameraman admitted reluctantly.
"Let's rent it."
Irving agree with me in this dispute. He knew enough about camerawork and about editing to understand exactly what should be done. Translating into Spanish, I explained Irving's plan to intercut angles from the different cameras so we could eliminate the slow-motion effect and also prolong the time of the drop without giving the appearance of trickery.
The big day came. Madrid gave us a wintry January sky that was exactly right for our Siberian express. With four cameras rolling and up to speed, action was called. The mozos on top of the tower pushed the cars off the ramp. They fell as required and when they hit the ground, they exploded and burst into flames just as we planned. When cut together under Irving's supervision, the effect was perfect. No complaints were voiced then or later.
The rest of the work was done at the excellent sound studio just outside Madrid on the highway from the airport. First we dubbed into English all the dialogue that had been spoken by the Spanish cast members, who had merely tried to mouth the English words they were speaking during the shoot, though they didn't understand what they were saying. This looping process was painstaking and wearing, but it was relatively new to me and I found it interesting. After we had a final cut, the post-production meant extensive dubbing. Now we put together the picture, dialogue, sound effects, and music. I learned that each craft looked out for itself. During shooting, the cameraman worried about how his colleagues would judge his photography; the makeup man his makeup, the wardrobe man his costumes; and so on, for special effects, sound recording, and everything else down the line. Even the director, I felt, was more concerned with how his special contributions would be received than with the final effect of the film. Of course, the actors worried about their performances quite apart from how it might contribute to the overall effect. In the dubbing sessions, the sound-effects man wantes his work to be heard - loud. The composer/conductor wanted his music to be heard - loud. Everyone was so tired of listening to the dialogue over and over again that they knew it by heart and couldn't care less whether it was comprehensible to an audience that had never heard the dialogue before.
As a neophyte producer, I was in an unenviable position. "I don't know what's right, but I know what I like," I said, like any ignoramus. By now I had enough confidence in my picture sense to insist and to prevail, saying to myself and to others, if it turns out wrong, it will be on my head. Despite this, the final phase of filmmaking was the most rewarding. We had all the pieces in place and were putting them together to create a whole.
The end result was gratifying. I had plenty of good helpers to whom I owed much. I also felt that I had controlled the process enough to take pride in my accomplishment.
Posted by William Connolly at 6:11 AM