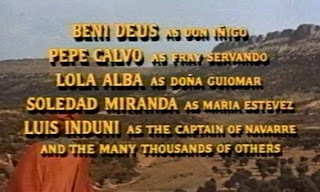 From: SO YOU WANT TO MAKE MOVIES
My Life As An Independent Film Producer
by Sidney Pink
(After the success of THE CASTILIAN, Sidney Pink created a new movie company in Spain and then set out to make a movie called PHANTOM OF THE FERRIS WHEEL, aka PYRO. The leading role went to American stars Barry Sullivan and Martha Hyer.)
In Spain I finished my casting with a flair. We had only a few more parts to fill, so I made certain every one of my actors could play their parts in English. I discovered a young Spanish actor, Fernando Hilbeck, who spoke perfect English with just the right touch of accent needed to make his part credible... Fernando was damned good and he appeared in almost every film I made in Spain.
In making THE CASTILIAN, we discovered a sixteen-year-old blonde beauty, Soledad Miranda. I was so impressed by her native ability that we put her under long-term contract with our company. She played the part of the young daughter of the owner of the carnival who falls in love with the totally unresponsive ferris wheel repairman. It was a nothing role, but she did well with it. The rest of the casting was for small parts, so I allowed Julio Coll to select the rest of the actors with the proviso that they must be able to do their dialogue in English.
Posted by William Connolly at 8:53 AM