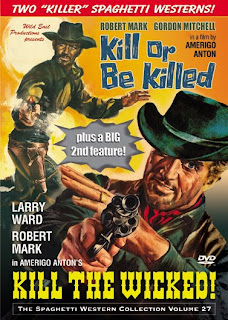 Renato Terra: I also worked with Tanio Boccia, a director whose name had become proverbial, considered in Rome as the last of the directors who worked carelessly and at a whirlwind pace, in short a complete hack, even if he wasn't really any worse than some of the others. For example, it had become the fashion when one screwed up a film to say, "Tanio Boccia could have done better than that!" A trademark in fact...a director who ran, who danced: camera here, camera there, with incredible speed. Well, this Tanio Boccia whose name had become proverbial, then went off and changed his name. He became Amerigo Anton. I did a Western with him, produced by Rovere, entitled UCCIDI O MUORI (aka KILL OR BE KILLED, aka RINGO AGAINST JOHNNY COLT). I had to play an alcoholic doctor in a saloon, and I had to walk around the tables and the customers, begging for something to drink. And Boccia was going: "More Thomas Mitchell! I want you to be more Thomas Mitchell!" I responded: "But look here! Why don't you be more John Ford!" Even so it went well; at least, he told me he liked it, Naturally, I didn't feel at home in these sorts of films. Apart from the usual nonsense of the screenplays, one who has worked with Visconti, with Germi, with De Santis, naturally felt at a loss.
Posted by William Connolly at 6:11 AM