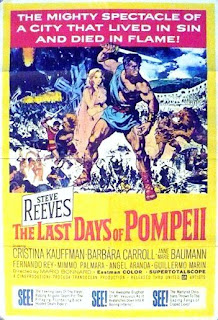 Sergio Leone: L'ULTIMO GIORNI DI POMPEII (THE LAST DAYS OF POMPEII) was practically directed by me, because (Mario) Bonnard was ill, and besides he had a commitment to make GASTONE with Alberto Sordi. I became a substitute at his precise request, but I didn't want to be credited, out of respect to his original design. My assistant director was Duccio Tessari, the 2nd unit director was Sergio Corbucci, and we divided it up amongst ourselves. This film almost became a joke, because in the screenplay (I was one of the scriptwriters) we had written it for a type like Sean Connery, intelligent, astute, etc. But ten days before we began they told us instead that they'd had the great fortune to have secured Steve Reeves. Therefore, suddenly this film became naturally centered on the pseudo brute-strength of Steve Reeves. We had to completely change the nature of the story, and therefore in the space of a week, we were forced to totally re-write the screenplay in order that it would work with this species of robot. However the fact that this film did well; got me an offer to debut as director with IL COLOSSO DI RODI (THE COLOSSUS OF RHODES). The screenplay was written with (Duccio) Tessari, (Ennio) De Concini and Savioli who then became the critic of "Paese Sera". However with IL COLOSSO DI RODI, I was practically writing it while I was shooting because I needed to resolve the problems of the screen-play that jumped out at you there and then, because it was impossible to film certain things that had been scripted. I wanted to explode the genre a little bit, and if one watches it with an attentive eye one sees a film cast in an ironic mode. The main character is a playboy, and I tried a sort of epic comedy, with the irony not too obviously signposted, but there to be noticed by the connoisseur of cinema. Frankly, the film was my meal ticket; when it was made known that L'ULTIMO GIORNI DI POMPEII had been made by me they asked for another hit similar to that. We spent many years turning down such films, me and Cottafavi. We turned down each other's films.
Posted by William Connolly at 8:52 AM