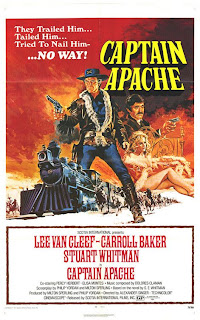 From HOLLYWOOD EXILE Or How I Learned To Love the Blacklist
by Bernard Gordon
Gordon was engaged by Philip Yordan to work at a new studio he created in Spain as a writer-producer.
Shooting on A TOWN CALLED BASTARD was completed and the editing was under way. The "studio" was not much - offices, dressing rooms, a warehouse, and a standing Western street with a substantial wall, a tower, and a well-built church, finished inside and out. The street was minimal, not much more than a cantina, which was all that the Mexican pueblo of BASTARD had called for. But the wall, tower, and church were impressive enough, and we could see how, with the erection of a few storefronts and a hotel, the requirements for CAPTAIN APACHE would be met. There was no soundstage and the interiors would have to be shot inside the church, in the warehouse, or in the interior of the hotel, still to be built. Since shooting on APACHE was due to start shortly, the construction had to start immediately.
The next few months, until the end of 1970, were a time of madness. Nothing went right, but everything finally worked out - if the quality of the picture-making is ignored. I was involved in every aspect of production: construction, casting, wardrobe, locations, sets, publicity, even makeup, yet I had no real authority. Most of all, there were endless hassles over the script. The APACHE script was a dreary mess. (Cowriter & Coproducer Milton) Sperling knew it and wanted rewrites. I found that working with Sperling was impossible. For weeks I held conferences, listened to his comments, reached agreement on changes, went back to my hotel (now a nice suite at the Commodore) and wrote late into the night. The next day Sperling liked nothing, had changed his mind, demanded a rewrite of the rewrite. Yordan was too involved with more important matters about financing and coproduction to concern himself with script. I suspect, also, that he may have resented the notion that we were rewriting his work. Eventually, I tossed the pages back to Sperling, told him I was not being paid as a writer, and if he knew better than anyone what was needed, he could make the script changes himself.
Impatiently, Yordan cut through all this. "Forget about making changes. You're wasting time. You're not making it any better. We're going to shoot the script the way it is."
Posted by William Connolly at 6:15 AM