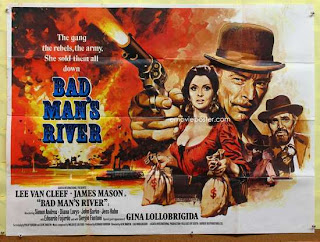 From HOLLYWOOD EXILE Or How I Learned To Love the Blacklist
by Bernard Gordon
1971 began on an unpromising note. Yordan had purchased a very large apartment on the northern outskirts of the city, and he had locked himself up there for ten days with instructions that he not be called or disturbed. He was writing a new version, suitable for filming in Spain on our Western street, of an old turkey, BAD MAN'S RIVER, that he had been unable to unload in Hollywood. At the end of the self-imposed exile, he emerged cheerfully and handed me the new script."I wrote this in ten days," he boasted, "and Faith read it and says it's the best script she's ever read."
I was surprised to hear that Faith had ever read a script before. What could I say? I just swallowed hard and replied, "I'll read it right away. Get back to you."
"Oh," he said, "I've also given a copy to Irving to read."
When I finished reading it and found it as bad as I'd feared, I wondered whether I should tell the proud chief how I really felt, whether I should hedge or just go hide. For advice and comfort, I called Irving. "Have you read Phil's script?" I began neutrally.
"Yes."
"What did you think?"
"Not bad," he replied.
I was astonished. "You mean you liked it?" I was still trying to restrain my anger at what appeared to me a cowardly sell-out.
"Well," he said, starting to hedge, "I thought there were some pretty good things."
"Have you talked to him about it?"
"Yes."
"What did you tell him?"
"I told him I liked it."
"Look, Irving, how could you? It's a total mish-mash with characters dropping in and out, no continuity, no credibility, nobody to root for. It isn't a comedy. It isn't melodrama. It isn't anything..." I couldn't go on.
"Well," Irving tried, backing off, "it isn't as bad as you think. I..."
Valuable as he was, I understood that Irving had no status or security around there and had to be careful not to offend Yordan. Unlike Irving, I was supposed to function as a producer on this next film - my first real production experience. I had responsibility. I would have to deal with a director, with actors, and, ultimately, with the people who were investing over $1 million in this venture. I knew I didn't have the Teflon veneer to slide away and pass the buck. I was no Yordan. He was never responsible for any disaster. There were always a dozen other people and circumstances to explain failure. He knew how never to admit any association with failure. This was a valuable talent I didn't have. I saw myself drowning on job number one. Since I was absolutely unable to echo Faith's enthusiasm about the script, I dictated three pages of notes about the problems I saw. I figured that at least, being specific might shield me from voicing an over-all judgment.
"I can see a few problems," I said when we finally got together, and I handed him my lengthy notes.
"Sure," said Yordan. "I'll read them. Thanks. There's always some little fixing you can do." If he was impressed with my acuity or industry, he concealed it well. He went on, "You know, we've got to move ahead right away. Lee Van Cleef gets here in ten days. We have to do more casting so we can start shooting. We have to get moving with a production and a budget so we can pay the bills at the studio. The budget's gonna be done from this script the way it is." This was a lecture. I was being given a lesson in the realities of filmmaking.
Posted by William Connolly at 6:26 AM