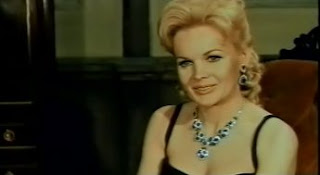 From HOLLYWOOD EXILE Or How I Learned To Love the Blacklist
by Bernard Gordon
(While trying to get A TOWN CALLED BASTARD into shape for release, Bernard Gordon was in pre-production for the second movie to be made at Philip Yordan's new Spanish studio.)
Meanwhile CAPTAIN APACHE had to start shooting. Lee Van Cleef had been signed as the lead. He was an ex-stuntman who had become a leading man in spaghetti Westerns. In appearance he was well cast to play the Indian-who-became-a-lawman-for-the-whites called for by our script. He was tall, well-built, with a strong, aquiline face. He had been signed for two back-to-back features at $150,000 each, but he seemed to resent everything about work. I found him a clod and wondered why he appeared sullen. I decided it wasn't the script - I doubted he'd bothered to read through it. Still we had to be concerned about getting another script ready for him after APACHE.Carroll Baker had been signed for the female lead. She was a delight. True, she got in a flap over getting exactcly the right brand of bleach for her very blonde hair. I picked up the phone and reached Jean just before she left Los Angeles and asked her to get a stock of the special brand; I had to make arrangements for a hairdresser at the Hilton beauty salon to report each morning at five a.m. to get Baker ready for the day's work. Carroll was serious about her work, though, was always on time, always knew her lines, and laughed readily at all the right moments. My sessions with her in her suite at the Hilton were entertaining. She traveled with a very small dog, a Yorkie that couldn't have weighed more than five pounds. She carried it with her on airplaines in a little overnight bag that had been fitted with plastic windows and air holes. The Yorkie was so small that whatever mess it made was easily picked up, and Baker was relaxed about this, as she seemed to be about everything. Always considerate about sex, she also carried with her a small stuffed dog about the same size as her terrier. The real dog had a fine time humping the stuffed dog, much to Baker's satisfaction. "The little fellow simply has to have an outlet," she explained to me. And why not?
We were well along in the production when she had to play a fairly explicit sex scene with Van Cleef, both of the lightly clad under the covers and presumably naked. Baker went along without demur and disrobed above the waist. Van Cleef, also undressed, had to appear to be making love to her.
He was alarmed. "What will I do if I get an erection?" he demanded. I was not on the set at the time and the problem did not have to be resolved by me. After a hurried consultation with (director) Alex (Singer), the matter was turned over to (producer/writer) Milton Sperling, who came up with a quick answer.
"Fuck her," Sperling replied gleefully.
Posted by William Connolly at 6:23 AM