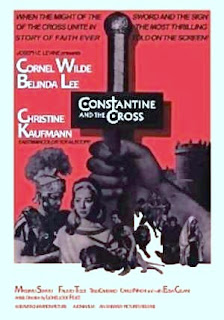 Duccio Tessari: (Ennio) De Concini was indeed the man with the ready solutions. A kind of savior of our Italian cinema. One morning he presented himself to a producer who called for him to change the finale of the film CONSTANTINE THE GREAT (aka CONSTANTINE AND THE CROSS) because it didn't work. The film was already being shot, so naturally there was this kind of rapid marshalling of thoughts, and then Ennio said: "I have found a very beautiful finale. Exterior day, morning sun. On the one side, the army of Constantine, from the other the army of the Barbarians. Constantine advances with his men up to the banks of the river, likewise the Barbarians on the opposite side do. Constantine unsheathes his sword, he lifts it toward the sun, the sun beats down on the hilt, transforming it into a cross, and then Constantine raises it even higher, turns to his men and cries "By this sign we will be victorious". And after this, they charge." On the word "charge" the producer interrupted to say: "De Concini, we don't have any more money, we have arrived at the finale without a lira, and very beautiful as this thing is that
you see, we just can't do it".
To that De Concini without batting an eyelash, says: "Ah, very well. Then: Exterior. Foggy Day. From out of the fog comes Constantine to call to the Chief of the Barbarians. Also the Chief of the Barbarians comes out of the fog and Constantine says: 'Why sacrifice all our men in a battle, when we can fight one against the other and the winner will decide the fate of the war.'"
After another half-hour of discussion, they found a halfway solution in which there appears Constantine, the Chief of the Barbarians, and about ten extras.
Posted by William Connolly at 6:50 AM