Vittorio Cottafavi on AMAZONS OF ROME 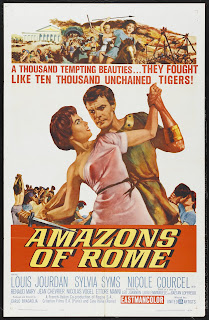 Vittorio Cottafavi: For LE VERGINE DI ROMA I worked on the screenplay with Leo Joannon and directed the film for two weeks, but I disagreed with the producer from the beginning and was not sure that I would be successful in making the film the way I wanted. Then I found a possibility of abandoning the film, so that it would be taken over by Carlo Ludovico Bragaglia. I directed the sequence of the bridge defended by Orazio Coclite, certain scenes in the camp of Porsenna, others of the crowds in the forum, the girls crossing the river, and parts of the scene in the sewers. When I saw the edited film I was quite angry. They had not used all the material that I had given them. The sewer sequence was rather long and complicated. The more the girls advance, the deeper the water gets, becoming more and more dirty, until it rises to the height of their breasts and of the heads of the horses. And I had also made certain fairly disgusting shots of mice running nearby in the sewer and frightening the horses. This conveyed the will power required by the girls in order to go on.
The idea of Louis Jourdan eating the fruit (before the battle) was in the script, it was useful for giving a sense of "nonchalance gauloise" (French insouciance) to the Chief of The Gauls... A man who takes food and women with such seriousness, but doesn't consider the war to carry the same sort of thrill.
Posted by William Connolly at 6:17 AM