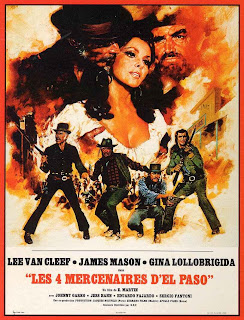 From HOLLYWOOD EXILE Or How I Learned To Love the Blacklist
by Bernard Gordon
The story was about four notorious band robbers in the Old West who are hired to slip into Mexico and blow up a Mexican ammunition dump. Normally, it might have been difficult to get a director to go with this script, though recalling Yordan's ploy with Siodmak and CUSTER, I had no doubt that the would find a way to cross that ditch, and it was even easier this time, because, to get Spanish nationality for the film, we had to have a Spanish director. Sacristan came through with a recommendation, a local director who had even made a couple of films in England, a man with excellent English. We ran the films he had made in England and found them quite professional by our own standards. A man of about forty, Eugenio Martin was slender, sensitive, and pleasant-looking. He had grown up in Granada, the site of some of Franco's worst brutalities, including the murder of the poet Federico Garcia Lorca, but Eugenio had been a boy at that time and grew up to become a teacher and professor of English. I always assumed that Eugenio was civilized to deplore Franco, but this was still Franco's time in Spain and people did not express any negative opinions about their generalissimo. Eugenio was thrilled to be hired for an American feature, to be paid well by Spanish standards, and to be working with the distinguished Academy Award-winning Philip Yordan.
Posted by William Connolly at 6:50 AM